StartWithTheName posted an excellent approach to Lily, but at that time no one knew the campaign yet. Now that we know more, let's see how to play her in the Edge of the Earth Campaign. 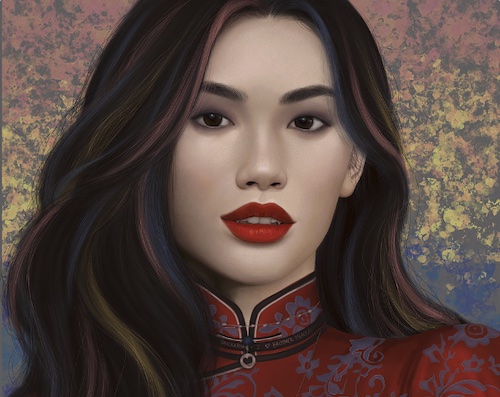 The first run-through of the Edge of the Earth campaign gave us 2 insights: there is a lot of XP, and moving is heavily needed. On the other hand, healing Partners is not as necessary as initially thought.

This deck is built for a 2-investigators run of the Edge of the Earth with Monterey Jack. To see the Build for Jack, click here.

• Playing the early game with the Dragon Pole

• Make your own deck!

Clue-getting: ★★☆☆☆ (depends on the difficulty)

• Spam your Dragon Pole or your Cyclopean Hammer with your ridiculously high to clean the board for your teammates.

• Use your Discipline to stay alive.

• Fill up your empty hand with the Discipline.

• Maintain the Story Partners alive with Ward of Protection.

• Use your Sixth Sense to speed up the game by discovering clues when there is no enemy.

Playing the early game with the Dragon Pole:

• Lily Chen was revealed with her intended weapon: the very thematic Dragon Pole.

• Thinking of having 5 Arcane Slots with Familiar Spirit, Bandolier+Sign Magick is unnecessary on the first scenarios when attacking with 6 is often more than enough (especially with no Ammo involved). So let's focus on filling up 3 Arcane Slots as easily as possible to have 7 to be able to skip the Discipline.

• Scrying is cheap and quite useful (compared to Alchemical Transmutation). You will use it on a "lost" action when waiting for an enemy to be drawn. The best way to use it is on the Encounter Deck as it gives you a chance to tutor an enemy or at least direct some treacheries to you rather than on Jack/Bob and their low .

• Sixth Sense or Clairvoyance to support your cluever. Sixth Sense is more reliable as it doesn't risk hurting you, is cheaper and doesn't have charges. Clairvoyance, on the other hand, is interesting as you have only 2 Guts, so if you commit it, you want the best return on investment. You will also be able to use your Discipline's built-in ability on an investigation to get a maximum benefit.

To learn more about the different Paths for Lily, please read the review on her dedicated Card Page

• Finally, the newly released Talisman of Protection because it is Fast. It is also a good way to balance the risk of In the Thick of It.

• The Arcane Initiate is here to help you find your Arcane Slot Fillers as fast as possible. It also helps after the first scenario to find your Enchant Weapon!!

• To have a better success rate for your skill test, you need to improve your stats, which you can do in 2 ways: your Disciplines and your card pool. We will review your card pool here and discuss the Discipline in the next section.

• As we're planning on flexing, we want to improve our that is used for both Attacks and Clue getting while keeping a decent for when you only have your Enchanted Blade.

• Early campaign, Holy Rosary will be a good boost alongside your Discipline.

• Unfortunately there is no static boost in the card pool and Beat Cop / Grete Wagner are simply too expensive and the slots are limited. Better wait to get Beat Cop (2) that you can heal with Hallowed Mirror for more uses.

• Reliable, that you can attach twice to the same Asset gives you +2, and up to +4 when you attach both to your Cyclopean Hammer attacks. This should be enough to reach the bonus even on higher difficulties.

• A fully set up Lily will use her Hammer with no less than 14 on each attack. Even the -8 won't bother you anymore.

When looking at Disciplines, there are 3 things to consider:

• The Static Boost: Running around with your Cyclopean Hammer you are interested in and . The is good for Encounter Protection occasionally.

• The one-off ability of the Discipline:

•• The most interesting is the Discipline that allows you draw cards when your hand is low. The more you need it, the more it gives. It is especially interesting as drawing cards is the biggest weakness of most .

•• The Discipline gives you more Attacks though the word "different" prevents you from using your Cyclopean Hammer 3 times. You can use it once, and your Spectral Razor if needed.

•• The Discipline gives you a great survivability but it unfortunately only works for yourself. It is a free, permanent Painkillers + Smoking Pipe on steroids.

** Finally the Discipline is rather useless. It takes one action to boost one test and depletes you from a highly appreciated boost to do so. The fact that you need to do it in advance prevents you from using it against the Encounter Deck. It is very likely that you will never use it.

• Flipping it back to its Unbroken side after use:

•• The Discipline will be hard to flip back over as you need to play/commit at least 3 cards to have it back. But as you do not need the it doesn't really matter and it flips back as soon as you need it, so you can assume that it will be Broken most of the time.

•• The should also be fine as you will probably not have enemies anymore after you just made 4-5 attacks unless you draw one enemy during the Mythos Phase immediately after using it. This build doesn't need for anything else than Encounter Prot though, so it's no big deal.

•• The Discipline should be quite easy to switch back as you overall have a good encounter prot.

•• Finally, the is a big handicap as it forces you not to have a single skill test to find it back. You can assume that you will never use it especially looking at how important its static boost is.

• Conclusion on the Disciplines:

• For a Cyclopean Hammer build, Lily will potentially take the Disciplines as follows:

•• 1st the for its Static boost that you use for Fighting, getting clues (and therefore win the game) while also offering a good survivability.

•• 2nd: The is likely to be your second Discipline for the Draw-Engine that it brings.

•• 3rd: the will be your 3rd Discipline because you do not need the Static boost at this point as you're already hitting harder than you'll ever need, so you can use its built-in capacity especially if you need to compensate the or some Move actions before fighting.

The maps of this campaign are notoriously huge. Moving around the map will make the difference between success and failure.

• Safeguard (2) is the most action saving one, protect your and save tons of actions.

• Fang of Tyr'thrha is your friend to clean the map. It is expensive but does a great job against Spawn at enemies.

• On the Trail (1) is a good help to get faster to your target. You can play it first turn for example, collect 1 enemy on the way, then use your Discipline to kill them both.

• Ethereal Slip is a good option but not so cheap and hard to fit in the deck... A really satisfying combo though is to kick an enemy 2 locations away with your Cyclopean Hammer and switch location with it after.

Why having Sixth Sense and not Shrivelling or Azure Flame as a main fighter?

Your goal here is not to be a proper clue-getter but more to accelerate the game when there is no enemy on the board. We’ve all had that situation when you’re fully prepared but there are just 2-3 mythos phases without a single enemy.

The game is about a race against the Mythos, and defeating enemies helps you not being blocked in your quest, but does not move the story forward (besides exceptions). Getting clues is really what brings victory and by adding one spell to get clues, with an equivalent of 4 (up to 5), you improve greatly your chances of success.

During the early campaign, your priorities for Mulligan will be anything that includes: Dragon Pole and tutoring: Arcane Initiate/Prepared for the Worst.

Later in the campaign, your one and only target is The Cyclopean Hammer. Keep anything that looks like The Mjölnir, a Backpack (2) or Prepared for the Worst.

• In the Thick of It It is especially good in Lily Chen as it gives her access to her other Disciplines earlier in the campaign. Use it here to set up your Asset heavy deck faster and save actions moving.

•• Enchant Weapon will be a new Arcane Slot filler and therefore can replace one of them. Scrying is good for tutoring but really action intensive so it is the first one to be replaced.

•• Attach Prepared for the Worst, Emergency Cache and Ever Vigilant.

•• Now that you have the Discipline, your draw is good enough to live without your Arcane Initiate. You can use the Beat Cop (2) if you do not own the Nathaniel Cho box.

•• Your main weapon until the end of the campaign. From there nothing can stop you.

•• Reliable attached to your Cyclopean Hammer gives you Overpower for each attack, and is Fast.

•• Look into the Encounter Deck, find an annoying Spawn requirement, take it, go there, kill it and get your money back. Neat.

•• Now we can go for luxury upgrades. This one is especially powerful as you play in Hard/Expert when tokens with symbols can make a huge difference.

•• You get the same amount of money, avoid a treachery card that may hurt your Partners and get to have fun.

Make your own deck!

Other cards that are really good for Lily include:

• If you have a limited library of cards, you can go for Vicious Blow instead of Glory, Unexpected Courage instead of "Let me handle this!", an investigation spell like Rite of Seeking, and anything you want to try to replace Spectral Razor that is mostly here before you have a weapon or for your Discipline.

• Enchanted Armor if you get a lot of trauma as one of the best soaks for you.

• The combo Holy Rosary and Nephthys (instead of or in addition to Beat Cop(2)) is incredible: generate tokens, seal them on Nephthys and release them for an extra 2 damage, while boosting your Cyclopean Hammer attacks.

• Bandolier (2) + Enchanted Blade (3) (instead of Overpower for example) for more draw and potentially skipping the Discipline.

• Leadership if you are pairing with some Cheesy Rogue, as second support after "Let me handle this!" that also brings cash.

• If you are playing with 3 or more players, First Watch to replace "Let me handle this!" and upgrade to Stand Together to replace Emergency Cache, especially after upgrading to Safeguard (2).

• Ace of Swords if you feel like your is too low and you really miss the Discipline.

To learn more about Lily, visit the review on her Card's Page and leave comments to let the community know about the best way to build her! If the build changes a lot from this one, I will post another deck.

Now that you know everything about her go and enjoy the Martial Artist!