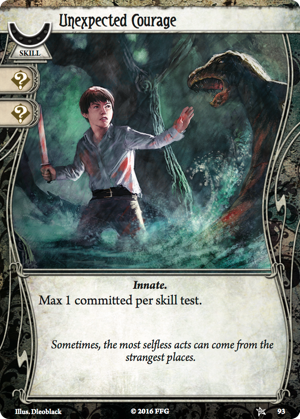 This is such a prominent and frequently-referenced card that I thought it deserved a quick review. In the days when we only had the Core Set, Unexpected Courage was absolutely one of the 15 best cards available to every investigator, and you saw two copies in pretty much every decent deck. To this day, people use Unexpected Courage as a benchmark for evaluating new releases.

I think Unexpected Courage is still a perfectly decent card, and will not cripple your deck should you run it. More often than not, though, I omit this card in multiplayer these days. Although +2 to any test for a card is not a bad deal--you can almost always find a situation where the test is important and the +2 is a significant swing in probability--for the vast majority of investigators, there is more than a full deck's worth of more powerful cards available. Simply put, the standards have risen.

This card does offer a lot of flexibility in exchange for relatively low power. But in high-level multiplayer, that's not the kind of trade you want to be making. The best approach there is to have investigators hyper-specialize and spend as little time as possible taking tests outside of their area of strength. You can see how Unexpected Courage is not one of the most powerful cards for this strategy.

Besides, this card's flexibility diminishes on high levels. On Easy, this card gives almost any investigator a decent shot at doing almost anything (except maybe the very hardest tests in their very weakest stats.) On higher levels, when the average pull is -a -3 or worse, you would have to stack a lot of additional boosts for the card to function this way.

I think this card is better in true solo, where flexibility is much more important. And there are some investigators who have special synergy with skill cards, like Minh, for whom this card is obviously more powerful. But these cases aside, I'm usually not finding room for Unexpected Courage these days.

(By the way, nothing in this review applies to the other core skill cards: Guts, Overpower, etc. Those cards are a totally different kettle of fish and continue to be outstanding, in my opinion.)

CaiusDrewart · 2815
I largely agree! I do think it maintains its value in multiplayer better than you're suggesting, though, mainly because you can commit it to other players' tests. That's a lot harder to do with skill cards that pertain strictly to your own specialty and not to the other investigators'. — sfarmstrong · 258 9/4/18
14

If you are a fan or follower of LotR LCG it will not surprise you that "Unexpected Courage" is a Core Set card with style, versatility and the promise of longevity in many decks. It is Level 0, Cost 0, Neutral and provides a +2 Skill Boost to any trait. Additionally, it has a cool keyword "innate" and the artwork is pretty awesome in a kitschy Kid vs Dinosaur kinda way. This card will certainly still be in decks many years from now.

whaggardjr · 49
What I love about this card is that it is not stupidly powerful but still very useful. Sometimes the simple things are the best. — Felagund · 524 1/1/17