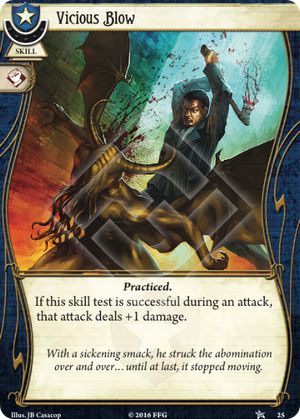 Killing a monster in one fewer action than would otherwise be possible is terrific. It's always useful to save an action, but Vicious Blow is at its very strongest when its action compression allows you to kill a monster you otherwise would not have been able to kill until your next turn. For instance, Vicious Blow can save you a lot of damage if it kills a monster that would otherwise have survived into the enemy phase. It could even save you an entire turn if it deals that last point of damage to a boss.

Moreover, by killing a monster in one fewer action than you otherwise would have, you're also reducing the number of skill tests you have to take. This is great. If you need to pass 1 skill test instead of 2, or 2 instead of 3, that allows you to concentrate your boosts, giving you much higher odds of a successful kill. And each skill test you avoid reduces your risk of drawing the autofail or some other nasty special token.

Of course, assuming you have a 2-damage-per-action weapon like Machete out, Vicious Blow won't necessarily be an action saver if you're facing an even-health enemy. Fortunately, though, there are plenty of enemies thus far printed with 3 or 5 health. Plus, you only need to add in 1 additional damage from some other source--maybe Beat Cop, or Zoey's Cross, or even a second Vicious Blow--and then this card can also work against even-health enemies.

Of course, there's a chance that you fail the test, in which case Vicious Blow obviously amounts to spending a card for nothing. But a) Vicious Blow itself gives you +1 to the test, and b) you can and should combine it with other boosts so you are very likely to succeed and get the bonus damage.

If an investigator has in-faction access to Guardian cards and plans on fighting with Combat (in other words, 99% of Zoey, Roland, Mark, Leo, and Yorick decks, plus the majority of Skids decks), I would basically always run this. It is a fine choice as a splash card for the likes of Pete, as well.