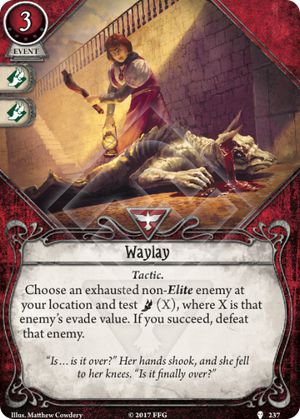 I will offer a dissenting view. This card looks powerful but I don't think it is outside of some rare situations or possibly a rich investigator that can't fight. It requires an action/test to evade and exhaust the enemy by any of the investigators. It requires a second action/test to defeat the enemy. And it requires 3 resources to attempt the test (success not guaranteed). And beyond those drawbacks it quite situational since it can only be used against non-elite enemies.

Most of my Survivor decks either want to use Dark Horse or they usually a little on the poor side and 3 resources is a lot. I would prefer to just kill the enemy. There are several good examples of high health non elite enemies in the other review but overall there are probably fewer than 10 such enemies in all of Dunwich and Zealot scenarios.

I might however spend 1-2 XP to add it to my deck for Undimensioned and Unseen but beyond that it is just too situational and expensive to be useful in general.

I haven't played about half of the investigators yet but the only one that really wants this card imo is Wendy Adams with 4 agility and 1 combat. She just can't fight even with access to the Rouge weapons (there might be one that uses agility) although Ornate Bow works for her (I think). Rita Young probably prefers to straight up evade and run away or use the Ornate Bow or Baseball Bat to whack most enemies. Situationally it would be great for her but not very often. Pete has Duke and Fire Ax to just kill enemies. Yorick will just kill enemies.

The obvious comparison to this card is Backstab. "It's the Survivor backstab", I hear you say. And Backstab is a kinda-average card: OK but a little clumsy and quite expensive, so the temptation is to think that Waylay fits into that category, but it's a far superior card for many reasons.

Firstly it can do more than 3 damage. Frequently you will do four, five, or even six damage with it. That's great.

Secondly it's "attacking" on the evade value rather than the fight value. There are lots and lots and lots of creatures that have a weaker evade than fight. The above two-cases provide a ton of monsters of which Waylay is a great target for. Almost every scenario has some, many of which provide XP. You'd be surprised what isn't actually elite.

Next is the fact that it's not technically an attack action, nor is it technically doing any damage. This might seem strange, but it gets around certain edge-cases, some of which are niche, but some of which are significant, or common. (You do also need to be aware that as it isn't a "fight", it will provoke if there are other enemies engaged with you. Stay safe heroes).

Lastly it has better icons. Double-anything is usually good, and here we're getting something that matches with our Agility (presumably we like Agility, as we're chosing this). Obvious heroes are Wendy, but it is excellent in Finn also, who can set it up with his free evades.

Survivor Sneak Attack or Backstab depending on how you look at it.

I won't deny that the effect is powerful, but it also does require that you have evaded (and exhausted) the enemy prior to the playing of this card. That isn't impossible, and for survivors it is even manageable to easy depending on your build.... but that extra action can really pinch you.

Still, it is a card that adds to the evasion only characters (WENDY) tool set by allowing them to eliminate a threat or a victory target.

I think the price is right and while this won't find its way into every Survivor character, it is pretty great for evader characters, especially Wendy.

So slot it in Wendy decks, but avoid it otherwise.

When waylay came out with a pallid mask, it could do some good work.
Adventures since (and Carcosa's return) have given us more difficult enemies, five or six or seven hit point foes, who aren’t elite. Yet, despite being 0xp, this card is best as a skill commit until mid adventure. Lola, Wendy, Preston… all three can use adaptable to swap it in. And it’s expensive, but a rogue splash or on your own can handle that. Your mileage may vary.

MrGoldbee · 1119
My millage with this card was taking it preston for undimensioned then leaving it in my deck and just finding instantly killing any problem using prestons cash. I think I undervalued it greatly, I prefer it immensely to back stab personally. — Zerogrim · 214 6/24/21