You can only include this asset in your deck by upgrading it from Archaic Glyphs (Untranslated), and only if "you have translated the glyphs" in your Campaign Log.

Spend 1 charge: Investigate. If you succeed, you may automatically evade an engaged enemy. This action does not provoke attacks of opportunity. 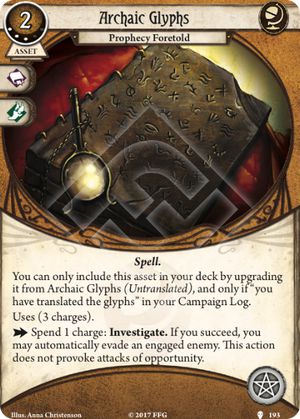 Baffled and disappointed when you saw this card?

-This card is an arcane item, it no longer occupies the hand slot.

-This card lets you investigate without provoking attacks of opportunity.

-If you succeed on your investigation check while using this item, an enemy is automatically evaded.

It is really easy to misunderstand the purpose of this card:

-This is not the card that lets you evade with your .

-This is the card that lets you totally ignore an enemy at your location while you investigate.

The scenario you need this card for: You're the clue-hoover, you pick up nearly every clue on the map while somebody else clears the way. An enemy spawns on you, it's some small fry with a half decent fight value and 2-3 hitpoints. What now? The fighter has to come running and deal with it right? Not with this card in play! You can just keep investigating, totally ignoring the threat, and if you happen to succeed in acquiring the clues you're there for (which is highly likely) you'll have evaded the enemy as well! Now if the location hasn't been cleared yet you can keep doing this for a couple more rounds if you need to.

By far the most powerful part is the fact that this card lets you investigate opportunity attack-free. If you find yourself hard pressed by a monster (multiple monsters even) at a difficult and important location (Difficulty 4 or 5), you can use this card to get the breathing room you need to throw multiple attempts at the clues you need to close out the game.

Tsuruki23 · 1179
I think this card lets you evade as an investigate test, but it does not give you any clues on it's test. It's like all those mystic cards, that let you do most stuff with Will instead. So this card is pretty bad because the enemy isn't dead yet. You should rather use the acid strange solution to get rid of enemies. — Django · 2788 1/7/18
@Django: I dunno. I was confused by this at first, but I think the reviewer's take is correct, since the text says neither "Instead of discovering a clue..." nor "Evade. This test uses Intellect instead of Agility." as one would expect it to if it were merely an evasion test using Intellect. I think it does let you investigate for a clue(s) w/o an AoO, then also evade an enemy (though, not all enemies) if the test successful. — Herumen · 1320 1/7/18
In short, Herumen's right. For example, Burgalry has investigation action that cancels clue gathering, but not this card. — KptMarchewa · 1 1/8/18
"Investigate" does not mean "Test Agility". If it was an Evade, it would say "Evade. Instead of testing . — CSerpent · 77 1/10/18
*ugh*, hit enter on accident. Anyway, "Investigate" does not mean "Test Intellect"; it means "Try to get clues". If the action of the card was "Evade", it would say "Evade. Instead of Agility use Intellect". Another way to look at it is: if it was Evade with Intellect, this would be more expensive, harder to get, and in every other way worse than Mind Over Matter. — CSerpent · 77 1/10/18
Since the card says make an investigate test, if you suceed you get all the benefits of having made one. If you used deduction you would get extra clues, etc. It's great action economy; you get two actions worth of effects for the price of one. — Daerthalus · 5 1/11/18
I see, so you get the clue. You get to evade ANY engaged enemy, which does not have to be engaged with you. — Django · 2788 2/15/18
@Django: I‘m don‘t think you can evade an enemy that‘s not engaged with you (except the text explicitely says so). — Astrophil · 1 2/15/18
... or maybe not. You could evade any enemy (it wouldn‘t even have to be at your location?). — Astrophil · 1 2/15/18
I really doubt that designer's intention was that you may evade enemy engaged with another investigator. Probably we should ask Matthew for clarification — Yury1975 · 1 2/16/18
You can only perform evade actions against enemies engaged with you. So, I think you can't use this card to evade an enemy engaged with other investigator. — shinotaku1412 · 1 3/13/18
"Unlike the fight and engage action, an investigator can only perform an evade action against an enemy engaged with him or her." -from the rules page — Ensign53 · 1 3/15/18
It is not performing an evade action, though. — Eruantalon · 100 3/26/18
Indeed, it's not an Evade action - no bold designator - and seems more like Stray Cat - which lets you evade non-engaged enemies. — AndyB · 427 4/2/18
This card is so good. With larger player counts Guiding Stones is probably better, but in solo this would be the one to take. In two player? IDK. It could probably go either way. — Zinjanthropus · 93 3/3/20