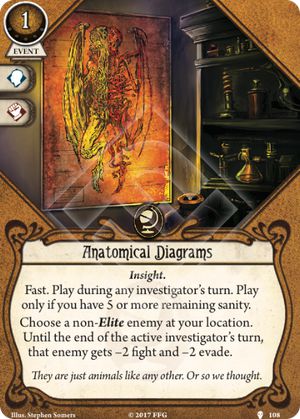 This card is a little weird, and it is best compared to another similar card, Mind over Matter.

For 1 resource you drop a foe's combat and evade rating by 2, this is a much stronger effect than increasing your own chances by the same value because: When you attempt a skill test, the result cannot go under 0. I.E, if you encounter foes that have 2 or less evade and fight values, evading or fighting them becomes pretty trivial once you drop those number's to 0. Swarm of Rats become autokill's for example, and so do Ghoul Minion if you just got the two actions.

So why isn't this autotake? I'll tell you, it's not just because of the severe drawback listed in it's play conditions. Against a foe that is harder to hit or Evade than just 2, you Immediately need to start backing up your tests with some actual stats, dropping a foe to 1 fight for example so that you can throw your Str of 2 at isn't that much better on, say, Hard difficulty. You'll need some other way to boost the attempt.

There is another upside to this card. Playing it to buff an actual combat character is a huuuuge play, especially if you're trying to kill some kind of boss, a -2 difficulty on every attack for 2 or 3 attacks is going to stack up a lot of extra hits

So, the comparison. Mind over Matter does a similar thing, but it's not limited by Sanity, and it's not team friendly, a fair trade-off because for character's the net benefit is mostly the same, usually a gain of +2 or more or , with Dr. Milan Christopher the gain can be enhanced. Dont forget that a isnt likely to have perennial support cards like Overpower, meanwhile Mind over Matter enables the use of Perception and the like to pump your fight value.

So, IF you do intend to take your brainiac out to punch some fools, this card is probably a bit better than Mind over Matter because of it's team utility and it's enhanced efficiency against low difficulty threats (Which can be an issue for pacifist characters to deal with), but if you actually intend to crunch some heads with your superb intellect then Mind over Matter is more reliably going to help you score hits on harder foes.

Edit: I'm a huge fan of equipping Norman Withers with Knife / Enchanted Blade, this card and Mind over Matter. One of the problems with combo cards like this one is actually finding it early enough to be in your hand when the circumstance arises. Norman speeds through a deck and can assemble all of those pieces faster than anybody else, also Anatomical Diagrams lets him autokill his weakness (barring autofail tokens).

Tsuruki23 · 2330
I agree that it's not an autotake, mostly because it's not Seekers Job to deal with monsters. I think the comparison with Mind over Matter is faulty though - while you can use e.g. Higher education to pump MoM further, Perception (or other pure Intellect boosting cards) explicitly don't work with MoM, as their skill icons don't match the original test, so can't be committed in the first place. So Anatomical Diagrams does not lose out much here. — Shakiko · 6 4/17/19
Just want to point out "if you're trying to kill some kind of boss, ..." the card says "non-elite" — theatog · 1 7/16/21
5

This card is really good. Don't listen to the haters who say "if you want to support your fighter the stars need to align and you need to be together with them."

That's true most of the time, and when it isn't it's usually because they're coming to you--the enemy is in your face. That, or it's somewhere you both need to be.

For Daisy, Minh, Rex, Norman, and Ursula the 5 or more remaining sanity is rarely relevant. For Ursula and Rex it's even a decent trick just for defending yourself.

Pack it the next time you're running about at level 0. When your fighter lacks >+2 options for damage, this card is worth its weight in gold.

Swekyde · 60
I agree that is card is great for 9 sanity investigators, but I disagree that the "5 or more" clause is rarely relevant. Even for those investigators, it is common to cross that threshold during a scenario. And what are the enemies you most want to use Anatomical Diagrams on? Those that spawn late in a scenario, because they're typically stronger. — jd9000 · 68 4/12/20
My actual love for this card comes from solo, as it lets you evade enemies you might not otherwise be able to. — StyxTBeuford · 12739 4/12/20
We did a 4 player seeker team once, this card was really great in first scenario to support Minh as our primary fighter. 2 persons can play this card at the same turn for -4, so it's nearly an auto success when the enemy has 0 fight. — Django · 4299 4/14/20
Absolutely critical when playing solo as a seeker. — DelightfulDilettante · 283 4/15/20
2

This card is underrated. Imagine a fast 1-cost guardian card that gives +2 combat and +2 agility until the end of the investigator's turn. That would be an auto-include in many combat-focused decks. So why is this card so little valued when it basically does that (at least against one enemy)?

jmmeye3 · 590
You’ve mostly answered your question in your own review. 1. The effect you describe would be solid in a combat focused deck but the fact that it is (a) a Seeker card and (b) requires 5 remaining sanity means that it is hard to both fit and use in a combat focused deck. Yes you can run it to support your buddy, but then you need the extra star alignment of being at the same space when it is needed. 2. As you say, it is only against one enemy. Rarely will you attempt to fight and evade the same enemy in the same turn, so it is more often +2 combat or +2 agility. Furthermore, a combat focused character rarely needs to make three attacks against a single enemy unless it is Elite - in which case the card doesn’t apply. Most seekers have an intelligence 2 (or more) higher than their combat and/or agility in which case Mind Over Matter is substantially better and less conditional. 3. Since you are usually getting the value on one or two skill tests, it becomes a skill card that costs 1. Often you are better off running Overpower or ManDex for the versatility and cycle. In conclusion, Anatomical Diagrams isn’t bad, but it is so conditional that it is hard to find the deck space in most decks for it. — Death by Chocolate · 1229 2/6/19
I love Anatomical Diagrams for solo Finn Edwards. He's more likely to want to both evade an enemy, then fight for extra damage from Finn's Trusty .38 and/or Hatchet Man. It can also benefit the Intellect test for Eavesdrop. And Logical Reasoning--a common splash in Finn decks--can help keep his sanity at or above the threshold for AD. — Herumen · 1639 2/6/19
We used this card in a 4 seeker party on hard (2x in each deck), it was pretty good. We defeated lots of enemies with our measily base fight. I know it's inefficient dealing only 1 damage, but what todo when no wepaon is available. Be aware that this cards stacks with itself, so 2 reduce an enemy with fight 4 to 0. — Django · 4299 2/8/19