Choose and discard from play a non-weakness treachery that is not attached to an Elite enemy.

We make our own fate.
Stanislav Dikolenko
Return to the Forgotten Age #9. 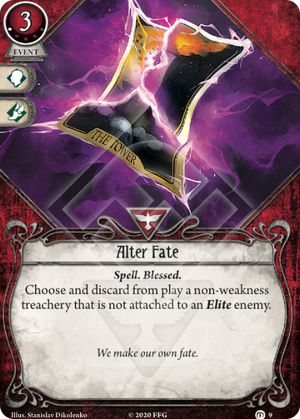 Just to be clear, neither this version or it's upgrade can discard a treachery unless that treachery has the text "put X into play", correct? In other words, If I draw a hex or something, I have to resolve the revelation effect; I cannot have someone play this to cancel that card entirely (that'd be Ward of Protection lvl 2 if I really want that effect). Right?

As for this card itself, it's... well, it's not great. In a nutshell, what you're doing is replacing whatever conditions have to be met on a threat area treachery with the following:

But that's not the whole story since there are other things you've spent or are giving up in order to have this card, so it really reads like this;

To compare, here are a few common treacheries. Now I'm only looking at cards from the deluxe boxes and return to boxes since these are the only ones that will continuously pop up throughout a campaign. Obviously, it's preferable Alter Fate has some value beyond getting you through a single scenario. Look at the cost to get rid of it is and ask yourself if you'd rather pay the alter fate cost (because it is extremely costly):

I like lvl 3 Alter Fate, but lvl 1 is massively inferior just from a numbers perspective. Unless you've got money to burn like Mr. Fairmont who I do think is ideal for this card since he can not only pay for it but also generate extra actions to mitigate that loss as well. Besides him, I suppose Stella might like it to get rid of those "end of your turn" treacheries so she can approach her turn undisturbed, but 3 resources and an action just seems like a lot to cough up. It does make you wonder what sort of threat area treacheries we might find in Innsmouth, no?

Also, question. Does either version of Alter Fate work on Straitjacket?

By the way, I love that the art is a depiction of The Tower • XVI, which was a subtle hint at the time the original Alter Fate released because we would see the tower released in the deluxe box a few months later. Nice touch, though curiously you can't use Alter Fate to counter it.

LaRoix · 166
Neither version of Alter Fate works on Straitjacket: "This card cannot leave play except by the ability below", and 'cannot' is absolute. — Tamsk · 1 9/12/20
I think the main reason to get Alter Fate (1) is so that you can upgrade it to Alter Fate (3) w/o any XP cost with Arcane Research. Both Patrice and Mateo can do that. — Zinjanthropus · 93 9/12/20
Preston also has the resources and actions to play AF1 - and can use it with Double, Double quite well in a larger player count game. — Death by Chocolate · 421 9/12/20
In an On Your Own build, this is worth considering as well, as you save 2 XP for each Alter Fate which you can use to take more important stuff, and the only thing you lose is it's not Fast anymore. — Nenananas · 23 9/13/20
Yeah I mean, I’m never not happy to see a downgrade because you can incrementally build your deck (plus I’m a sucker for marginal rpg improvement). And the combo with arcane research and on your own are both solid. I was mostly thinking of which off class survivors could play it well since it being lvl 1 opens it up quite a bit. As a card by itself I still think it’s quite poor. It can certainly be improved by good deck building, but Alter Fate lvl 3 is just so far and above this one that it’s a hard sell to me. While arcane xp reduction would be nice, this probably isn’t your highest priority spell to upgrades. On your own would be good with it if you’re running that. I think if this card had Fast and Exile, then I’d be more intrigued. You’d have to weigh if it’s worth saving it to upgrade it or if you really need to free yourself from a treachery. Idk just a thought. — LaRoix · 166 9/13/20
@LaRoix good thoughts, I definitely agree with what you said — Nenananas · 23 9/13/20
@Nenananas Hey thanks! — LaRoix · 166 9/14/20
There's one case where I'd consider buying it for scenario-specific treacheries , late on the Forgotten Age. That one needs quite careful timing and some of the scenario-specific treacheries can be crippling at the wrong moment. Beyond that, one funny case where I might have taken this card would have been to deal with Light of Aforgomon in particular as Tommy of all people. It completely shuts his ability down, and if it gets on to e.g Agenda 2 of Where Doom Awaits it's not leaving play on its own. Having a way to zap it gone would have been nice... — bee123 · 24 9/14/20
You missed the cards that attach (except to Elite enemies): Acrid Miasma, Altered Beast, Arcane Barrier, Conspiracy of Blood, Creeping Darkness, Dhole Tunnel, Driven to Madness, Harvested Brain, Incriminating Evidence, Infinite Doorway, Kidnapped!, Light of Aforgomon, Locked Door, Lunar Patrol, Mask of Umordhoth, No Turning Back, Nobody's Home, Obscuring Fog, Oppressive Mists, Overgrowth, Poisonous Spores, Primordial Gateway, Resentful Wilds, Secret Door, Sickening Webs, Song of the Magah Bird, Sordid and Silent, Spectral Mist, Spirit's Torment, The Pit Below, The Sign of Hastur, Threads of Reality, Towering Beasts, Wonderous Lands — Yenreb · 9 9/15/20
I did not miss the cards that attach. I deliberately didn't add them because I didn't want to list every treachery ever. Most of those target, again, I don't think are worth spending 3 resources and an action. But thanks for taking the time to list them in case someone is really having a rough go with them. — LaRoix · 166 9/15/20
The question worth asking is how many of those treacheries are worth an XP, 3 resources, a card, and an action to kill? I wager not many. This seems like a tech pick for Preston and maybe a transitional AR pick for Mateo, though he can use the savings on other spells anyway, and it might be worth jumping straight to level 3 for this one. — StyxTBeuford · 2317 9/16/20
It may also depend on the investigator so it is worth mentioning the attachments because there are some who are far more susceptible to something like Light of Aforgomon. The savings is nice for any Mystic that can take it, and I definitely agree that Preston would like it because the resource (and actions being a Rogue and all) aren't nearly that big a deal to him. Clearing the board space is always good, it's just how worth it is to you. One thing I didn't mention is that Survivors while enjoying their cheap cards, may not mind the 3 cost since most of their other cards are... well... cheap. — LaRoix · 166 9/17/20
I actually think it tends to go the other way for Survivors, in that because they tend to run cheap cards, they like to run their decks low curve and reward themselves for staying at low curve. Eg if I'm doing a Fire Axe/Labranche/Dark Horse build, I really want to keep as many cards as possible at 2 or lower. I do think this is roughest with the Mystics who can take it though, especially Marie who happens to just run a very expensive deck almost every time. That said, Marie can play this as a free action with doom in play, so that's interesting. — StyxTBeuford · 2317 9/17/20