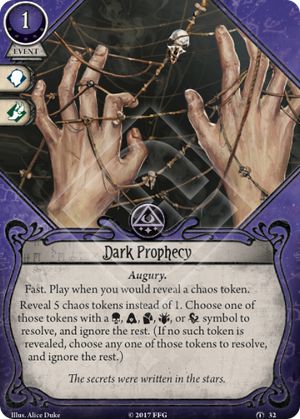 Q: How does Grotesque Statue + Dark Prophecy (or the upcoming Oliva) work?

A: "Yes, you can use Grotesque Statue and Dark Prophecy (or Olive) during the same skill test. When you use multiple effects that replace “revealing a chaos token” with something, else, you must first declare your intention so you are reacting to what you draw from the bag, because each of these effects are meant to be triggered before you draw tokens from the bag.

If you say you’re going to trigger Prophecy's ability first, you should then say which of the 5 tokens you’re about to reveal from Prophecy's ability will be turned into 2 tokens from the Statue (For example, “I’m going to reveal 5 tokens using Prophecy, and for the first token, I’m going to reveal 2 instead of 1 using my Statue). Then you’ll ignore one of the 2 statue tokens, and be left with 5 total tokens, which you’ll then choose 1 to resolve (with a bad symbol on it). Because all of these tokens are considered to be revealed simultaneously, what you are not allowed to do is reveal the first few tokens with Prophecy, and then decide whether or not to use the Statue — by then you are committed one way or the other.

If you trigger the Statue’s ability first, you would do the same thing, declaring your intent. (For example, “I’m going to reveal 2 tokens using my Statue, but for the second token, I’m going to use Prophecy's ability to reveal 5 instead of 1”.) Then you would choose between resolving the first token or the 5 Prophecy tokens. (Here this is a little strange, because Grotesque Statue says "Choose 1 of those tokens to resolve, and ignore the other,” which implies that you only get to resolve 1 token and ignore 1 token, but for the purposes of resolving these types of effects, the 5 tokens revealed from Prophecy's ability should be treated as 1 revealed token). If you decide to resolve the 5 Prophecy tokens you would then choose 1 to resolve with a bad symbol on it and ignore the rest, as usual.

I hope this helps. I know it’s a bit complex, but it’s all optional (and of somewhat limited usefulness, in my opinion), so I don’t expect it to come up too often. That said, I will make a note to add this to next iteration of the FAQ. "

Some math is needed to see what this card actually does. Please forgive any errors-- I did my best!

My conclusion based on all of this is that this card is mainly useful with Jim Culver and perhaps occasionally in a deck that uses cards with good synergy (Hypnotic Gaze, Jewel of Aureolus and Counterspell, etc). This card should not be used in most decks and I don't think you should base any deck around it.

jmmeye3 · 577
Yeah, I bent over backwards trying to fit it into a Jim/Olive deck (a quest which already feels like my own personal King in Yellow) but even without costing a resource, spending a card to give you a slightly better chance to activate another card is too much, no matter how cool the design and concept is. I'm hoping we maybe see a 1 VP version that just guarantees a skull and maybe pings you for a horror as well. — housh · 141 2/8/19
Good for Jim if he plans on using Song of the Dead (his elder sign is also a skull!). Alternatively to combo with defiance lvl2 (a key test and/or Diana maybe?) — Eruantalon · 101 2/14/19
I think your maths is a little off on point 3. — darkskyman · 15 2/17/19
Posted too soon! It’s not 100% that you’ll succeed. If you draw Autofail and no other hideous symbol tokens, then you’ll fail the test. So you need to calculate the probability of drawing five tokens where one is the Autofail and the other four are just numbers. This gives you the odds of failing the test, which using the bag and situation you outlined is 4.8%, meaning 95.2% chance of success. Pretty good, but not 100% — darkskyman · 15 2/17/19
Ignore my comments. Your maths is right; I jumped in too early without reading your whole post. As Andé Gide said: “Please don’t understand me too quickly”. — darkskyman · 15 2/17/19
Probably an autoinclude in Diana as well. — Myriad · 1137 2/17/19
i really liked this in Diana, especially after upgrading to Defiance (2). +2 willpower +1 resource, and replacing the two cards with other cards. also nice with Recall if you don't have good odds to pass a test (like being +1 for example) — Zinjanthropus · 208 7/21/20
Note the limit once per phase on Diana, sadly. — CaiusDrewart · 2741 3/21/21
4

Dark Prophecy is an interesting card. For 1 resource, you basically have the ability to hunt for a "bull shit" token on command. While you are not guaranteed to draw one with a 5 token pull, the odds do greatly improve.

Why would you want to draw a bullshit token? Perhaps you are hoping to have lots of options on a test to improve your odds of success. Maybe you are being defiant and trying to ignore a bad result. Or maybe you are hunting for a trigger off of a niche card like hypnotic gaze or song of the dead.

Usually, this card will let you succeed at a test when you need it, but it isn't always worth the slot.

IMHO, it justifies its slot when paired with other effects like Premonition, Glimpse the Future or Defiance moreso than it does to support cards like Song of the Dead.

In its shell of bag manipulation, it is a pretty neat card, but I don't know if all mystics would bother with it.

Just wanted to note that this card is great in a Diana deck with Sixth Sense, as it both increases the odds of getting the right kind of chaos token, and as it has an 'ignore' effect, you can stuff it under Diana to boost her will, get the spent resource back, and another card.

Benwobbles · 9
this should be a two of in every Diana deck and played at literally the first possible moment, its just a free cards that cycles and boosts your willpower by 1, even if it didn't help you pass tests it would be an auto include just for that. — Zerogrim · 249 4/5/22
0

Phoenixbadger · 177
One of the five revealed. I see the confusion, but it’s the same ‘those’ from the previous sentence. — Kergma · 8 8/4/20
I wonder how this card, Dark Prophecy, made it into print as written. If the intent was to confuse the reader, mission accomplished. The explanations on what it does are equally vague. The way I treat this card is as such: Play Dark Prophecy then reveal 5 chaos tokens from the bag. Compare your draw to the 5 symbols printed on the card and choose one that matches and reslove it, ignoring the rest. If none match then pick any one of the tokens you drew and resolved that instead, ignore the rest. — Lotharun · 1 8/14/21