When a token is revealed during a skill test, exhaust Jim's Trumpet: Heal 1 horror from an investigator at your location or a connecting location.

Daddy used to say, "Jazz is a lot like liquor, it makes everything go down a little smoother." Daddy used to say a lot of stupid things.
John Pacer
Dziedzictwo Dunwich #12. 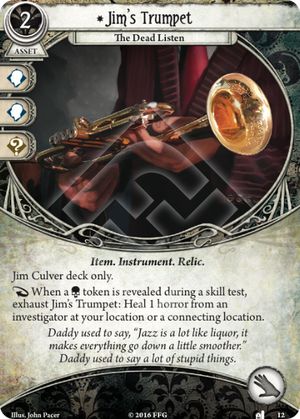 Note that this card does not require that you are performing the skill test, or even that it's at your location. As a result, in a multiplayer game it can trigger almost every turn, keeping you sane even while playing mystic cards and occasionally helping out your fellow investigators.

Don't forget that it works with Jim's elder sign ability. Usually there's no real difference between +1 and 0, so as long as skulls don't have some terrible extra effect, it's safe to turn your elder sign into a skull and enjoy the healing.

So people wax happy for Jims trumpet in multiplayer, where it triggers very often. Do not be fooled, however, as even though the trumpet triggers 4x as often your allies are taking roughly 4x as much horror in aggregate. In this sense it matches the scale of the game in multiplayer, but it does not exceed it.

Although there is a catch. When Jim plays you can choose who gets the horror. In a 3p game with Jim Daisy and Roland, Jim can tail Roland and play his sweet soothing jazz, effectively moving some of the games horror load from fragile Roland to mentally hardy Daisy and Jim. This margin is where the trumpet is actually super effective in multiplayer.

that being said the trumpet can do work on its own in solo or 2p, provided you have the action economy to afford it. Further Jim's passives make him pretty hardy in hard and Expert difficulties, so don't let his unique asset scare you away from trying him there!

Difrakt · 802
Getting done with a campaign we did last night we can say this: This does wonders if you are in 2p and the fellow investigator is lower sanity and helps heal horror Jim might take. This said, you want to pair this with Clarity of mind and/or Liquid Courage for healing more horror (and consistently). — Tanakoskyler22 · 14 5/31/17