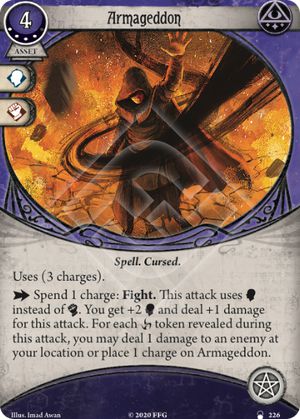 At this moment i think the safest way to use these -asset spells (alongside Eye of Chaos and Shroud of Shadows) is with Luke Robinson. The most effective usage of these spells comes with drawing one or even more -tokens. This comes with the advantage of getting bonuses even when missing the skill check, but also with the disadvantage to have to deal with an additional modifier of -2 (-4, -6, and so on). Therefore you want to draw -tokens but also need a way to compensate their drawback. So why Luke Robinson?

First of all every mystic can make use of Favor of the Moon to guarantee the draw of at least one -token. To compensate the penalty you can name this token with Recall the Future. Or as Luke Robinson you can pray to your Blasphemous Convenant to turn this one in an actual bonus to your willpower (combined with Recall the Future to +3 bonus). As an additional bonus the token goes back in the bag.

But how to generate these -tokens? Sadly mystics do not have a lot of ways to generate them. Promise of Power is a great skill card and highly recommended with this cursed style of play, but fortunately Luke can use Deep Knowledge to draw the needed combo pieces and fill up the bag. Furthermore he can use Stirring Up Trouble in high shroud places to flood the bag with these nasty tokens and get some easy clues. Fey is another skill that functions quite well with these kind of spells.

In the end it can only be said if you draw Dread Blessing as your weakness, you could actually call yourself lucky!

galge · 15
Ironically you don't actually need to succeed at the tests. If you're leaning into Curse at all, and you draw one and fail, you could either A. deal 1 damage (good choice if that kills your target anyway) or B. put the charge you just spent back on. This gets even better if you draw multiple curses in one test, even if you still fail. In that sense, the ideal user of these imo is not Luke but actually Dexter for 1. being able to discount these spells (they do cost 1 more than most of their counterparts) and 2. being able to use Rogue cards, notably Skeptic, to heavily soften the effect curse modifiers have on tests. You then get access to more cards that throw curses into the bag, like Faustian Bargain, Riastrad, and Priest of Two Faiths, while most Seeker curse cards remove curses for their own payoff, which is counter to what we want to be doing with the spells. False Covenant doesn't work as nicely as Blasphemous Covenant for such a build, but it will still let you preserve curse tokens when you draw them on non-spell tests. You could also try a mix bless/curse build with Paradoxical Covenant, using Favor of the Sun to turn a load of curses on one test into a pass. — StyxTBeuford · 12690 5/17/21
Scratch that on False Cov, I forgot it returns to pool and not bag. Still, not exactly a major concern with Favor of the Moon either way, but I'd probably favor Paradoxical Cov. — StyxTBeuford · 12690 5/17/21
yea i get what you're saying but skeptic is just one card that can be used twice. the blasphemous convenant can be used once every turn and most of the time you won't draw more than one or two cursed token. next to the seeker cards the rogue card pool is probably anyway the only one to generate cursed tokens at a low experience level. at this point even Jim Culver with faustian bargain and deep knowledge could be working, mitigating the flaws of the mystic class, resource and card management. ultimately i think dexter is as good as luke to use these spells, but i prefer the Blasphemous convenant. the Paradoxical convenant is in my opinion very unpredictable and putting blessed tokens in the bag will maybe mitigate the cursed modifiers but water down the chance of drawing them as well. and false convenant is working against the idea of using these tokens at all. — galge · 15 5/17/21
With Favors it’s not unpredictable at all, but candidly I don’t think you meed Blasphemous Covenant and get more out of both Dexter’s ability (including higher base will) and Rogue splash. Both would work well I think. — StyxTBeuford · 12690 5/17/21
Dexter is by far the worse curse spell user because Skeptic is reactive instead of proactive, so he can easily draw a curse and fail on higher difficulties. Not to mention that Priests of Two Faiths and Riastrad aren't very good on Dexter for that matter. Luke's synergy with Gaze and Manipulate Destiny is far better than anything Dexter has to offer. — suika · 8465 5/18/21
I think it's an exaggeration to call him "by far the worst curse user" — StyxTBeuford · 12690 5/20/21
Yes, which is why I said by far the worse, not worst. — suika · 8465 5/20/21
Phrasing — StyxTBeuford · 12690 5/21/21