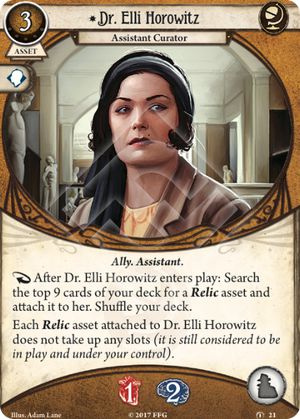 Tutors (i.e. cards that search your deck for a card and draws it) are only as strong as the selection of cards they can draw for you, which for the case for Dr. Horowitz, means she's as good as the relic cards in your deck. This observation, combined with the fact that the good doctor is a lvl 0 card, makes her a bit fiddly at the start of a campaign, where she'd feasibly be included unless you're willing to pay one exp for her later on.

There are, as of Dream-Eaters, six lvl 0 Relic cards, and only one relic, Tooth of Eztli. Of these relics, four occupy the accessory slot, which means extra relics in your deck will not be playable unless the first relic you play leaves your play area for some reason or other. This, coupled with the fact that the available relics don't synergies all that well, leaves Dr. Elli Horowitz rather lacklustre at best...

...Right until the likes of Key of Ys, Timeworn Brand, and Pnakotic Manuscripts start populating your deck, then you'll be praying she ends up in your starting hand. The more expensive the relic's resource cost, xp cost, and number of slots they occupy, the more value Elli will provide by completely ignoring the resource and slot costs, and speeding up the process of getting out your big hitter cards.

This doesn't make her any less fiddly though; once you're committing to including her in your deck, your selection of upgrades shrinks a fair bit. You'll likely be investing into at least one Relic Hunter and one Charisma, the former as insurance in case you draw two or more of your relics before Elli, and the latter because you'll likely want to include other allies in your deck, especially early on in a campaign where her usefulness is lacking. And of course a significant portion of your earned exp will be spent on relics, of which thankfully you get some leeway on where you want to take your deck, either in a combat-focused direction, or a more clue gathering angle, or a whole range of unorthodox functionality.

In conclusion, Dr. Elli Horowitz is the type of card you build an entire deck (and upgrade path) around; you certainly don't use her for her early-campaign power and then replace her once you get some exp. No half-measures; either she is the focus of your deck, or she isn't in your deck at all.

As for which investigators she'll likely be collaborating with often; naturally Ursula Downs has the relic synergy to make full use of Dr. Horowitz, and Mandy Thompson will get extra value from her tutoring effect. But special mention goes to Jim Culver, as the blog Rite Of Seeking made an excellent case for their pairing in their Big Relic Jim article (source:)

To summaries what said over there, Jim is the only investigator that can take Dr. Elli Horowitz and whose signature card is a relic (that doesn't start the game in your play area already), and to whom Enchanted Blade works nicely if it didn't occupy an arcane slot.

Lucaxiom · 2904
The biggest problem with Elli is you can't Calling in Favors her or otherwise replace her without also discarding the exact card you searched for and grabbed with her. This includes something like Segment of Onyx, so she might find one or even two pieces for you in Mandy, but then you have to find some non-Rook way of getting the third piece (or maybe you already had the first or second piece). So if you're taking Elli in Mandy, you need to take Charisma. I think the real benefit of Elli is that she can take Ornate Bow and let you use it without taking two hand slots, so you can sort of use her like Daisy's Tote Bag or Joe's Colts as a means of carrying 4 hand slots worth of stuff. This I think makes her best used with an Ornate Bow Ursula build. Even there, your chances of whiffing are quite high. — StyxTBeuford · 12540 11/1/19
I actually built the Ursula/Elli/Bow deck, and Elli was actually pretty good near the end of the campaign, but she only ever grabbed the bow once. I ended up cutting all of the other hand slot in the deck and talking 2*relic Hunter (as most of my relics were accessories) anyway. Fun deck to play, though. — Zinjanthropus · 176 3/5/20
2

Tried the card in our recently finished Dunwich Legacy campaign in a relic-heavy Jim Culver deck with Chthonian Stone, Key of Ys and a few other relics. Sure helped a few times, albeit being rather expensive from three resource. As a side note, have you noticed the woman in the picture looks like Lara Flynn Boyle from 1990s TV show Twin Peaks? :-)

What happens to the Relic attached to Dr. Horowitz when she leaves play? I think its discarded.

If its really worth picking up the Ally-Slot + Dr. Horowitz is not allowed to die. I`m not sure.

As I understand here, you attach a relic card when she enters play only? So there is only one attached at a time? The EACH relic bit has thrown me off.

As I understand here, you attach a relic card when she enters play only? So there is only one attached at a time? The EACH relic bit has thrown me off.

wes_huffor · 1
It’s a templating foresight in case there’s a card that would allow you to attach relics to assets in the future. — Difrakt · 1048 10/9/18
Or an effect that triggers “When this card enters play” reaction abilities twice, which I anticipate on a Seeker investigator at some point, given the prevalence of that effect on Seeker allies. — Death by Chocolate · 946 10/10/18
Does the relic sticks to elli if she is bounced back by calling in favors ? That would be a way to have 2 relics on her if it worked... — aurchen · 1 10/10/18
Quote from attachment rules: The "attach to" phrase is checked for legality each time a card would be attached to a game element, but is not checked again after that attachment occurs. If the initial "attach to" check does not pass, the card is not able to be attached, and remains in its prior state or game area. If such a card cannot remain in its prior state or game area, discard it. — Django · 3736 10/10/18
More to the point, "Once in play, an attachment remains attached until either the attachment or the game element to which it is attached leaves play (in which case the attachment is discarded), or unless a card ability explicitly detaches the card". Your hand is an out-of-play area, so Dr. Elli is leaving play, meaning attachments are discarded. — CSerpent · 106 11/25/18
Based on what Django said it seems that Skeleton Key would not get reattached to her when you use its ability to "return it to your play area". Right? — BobSmith · 10 12/15/18
Well, with Mandy Thompson revealed today, we finally see the design space of this card as Mandy can have Elli pull TWO relics and attach them to herself! — Death by Chocolate · 946 8/22/19
I'm fairly certain that if you attach skeleton key to a location and then return it to your play area it will no longer be attached to Elli. That makes Elli a bit stronger when used with the Skeleton Key, specifically, as you can happily allow her to be killed off or use her for Calling in Favors and play her again to find a new relic — Zinjanthropus · 176 5/30/20