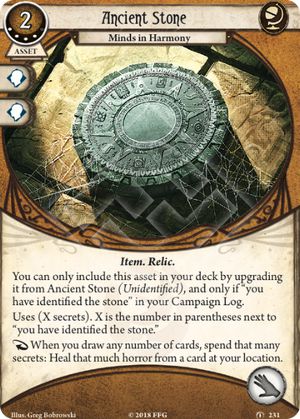 Carolyn Fern can take this; she can use the level 1 version because she's her, and this because it heals horror. She can also take Shrewd Analysis, which has a strange interaction here: Since this is the only "eligible" option, she flat out upgrades the second copy for free. The other version isn't eligible because she can't include it in her deck, so it's not included among the random options. Since shrewd analysis is so easy to include in a deck, it's now a viable include for Carolyn. The biggest hurdle is getting the initial investigate off to upgrade the card at all, but she can be built as a solid seeker so that's not such an issue.

SGPrometheus · 569
Wow!! That's huge!!! — matt88 · 2320 9/16/18
Yep, a huge get for Carolyn, but I'm pretty meh on this for everyone else, because the other Ancient Stone is just so good. This one would be great in Dim Carcosa... but so would the other. — CaiusDrewart · 2507 9/17/18
Either we 're getting something wrong about this card, or something's wrong in the works, regarding the site. I'm trying to add this in a Carolyn deck I created and the site overwrites it, telling me I've included a card that is forbidden for the investigator. Any idea why this would happen?? — matt88 · 2320 9/17/18
@caiusdrewart Agreed re: everyone else, especially since pretty much everyone else who can take this can take the other version instead. That's what I love about Carolyn though, she takes so many sub-par cards (First Aid, Clarity of Mind, Liquid Courage) and makes them into viable, powerful cards. — SGPrometheus · 569 9/18/18
@matt88 Well, let's take a look: The first card is a level 1 seeker card, and Carolyn can take Seeker cards 0-1, so that checks out. This card has "heals... horror" on it, anywhere, so that checks out too. My guess is that the (one) guy who does all the coding for arkhamdb hasn't gotten around to flagging this card as obtainable by Caroyln yet. — SGPrometheus · 569 9/18/18
Question: Can the stone heal Key of Ys? — Uncle George the Farmer · 15266 1/11/19
Note that because multiple cards drawn from a single game effect are considered to be drawn simultaneously and not one at a time, neither version of the Ancient Stone can divide a single 2+ heal/damage among multiple targets. Nor, on the wording of the card, is it permitted to spend fewer secrets than the number of cards drawn by the said game effect, e.g. you could not spend just 1 secret after playing Preposterous Sketches to draw 3 cards; it would have to be 3 secrets or else not use the Ancient Stone reaction-trigger at all. — Cluny · 46 1/14/19
@Uncle George the Farmer: Answer: yes, if it's at your location. See the FAQ entry. — SGPrometheus · 569 1/26/19
Could this affect be used to heal investigators character cards at your location? Just seeing if that qualifies — coffeeandgames7 · 1 3/10/21
@coffeeandgames7 Yes, an investigator's card has a sanity value, so it can be targeted. — MiskatonicFrosh · 106 3/11/21
Epic combo from our recent Carcosa campaign with "Stand together": Carolyn draws 2 cards, gains 2 resources, Agnes heals 2 horror, gains 1 resource, Minh draws 2 cards, gains 2 resources, deals 2 damage to an enemy without AoO. — Susumu · 156 3/28/21
0

With Return to Forgotten Age, this is a great Stone upgrade for Ursula Downs, especially if you can get Dr. Elli Horowitz to hold it for you. With one of the worst weaknesses in the game this Stone offers great protection, and if you are also running Veda Whitsley with Charisma, you have a lot of double-chances with the encounter deck during the mythos phase. Throw in Truth from Fiction at level 0 or 2 and maybe Astounding Revelation and you are in great shape.

Krysmopompas · 213
Astounding revelation requires some search effects. You can also add scavenging with versatile to your deck and recycle the empty stone — Django · 3684 9/16/21
I don't quite get, what makes her weakness so bad with "Return to Forgotten Age"? — Susumu · 156 9/17/21