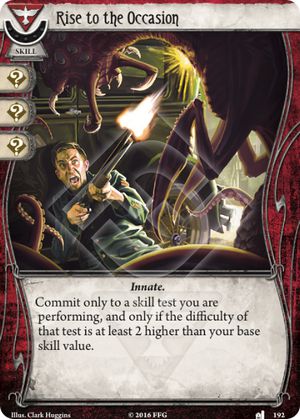 Three is fantastic. I love the restriction, it feels thematic and inline with other cards like Lucky!, Oops! and "Look what I found!". When it works it is incredibly helpful however I have found it a bit of a dead card often sacrificed to Wendy Adams ability. It's probably better including Unexpected Courage and other skill cards with more versatility rather than risk having a dead card in your deck.

Pilgrim · 271
FWIW, I've found the same. The condition about 2 or higher does make it tricky to get into play, and do you want to be trying something that you start at -2 for? — AndyB · 865 5/3/17
I think this card is brilliant for Pete. His base fight and intellect values are two but they are essentially 4 when taking these actions with Duke. — RedV · 1 5/4/17
On second thought, I am not sure anymore whether Duke would circumvent that requirement. Duke says with a base skill value of 4 while this card says than 'your' base skill value. — RedV · 1 5/4/17
I always include all neutral skill cards in my decks, except unexpected courage. They're fantastic, as they cost nothing and you draw a new cards, if you suceed. I don't think this card works with duke, as he replaces petes base values. However it should be pretty good to balance both survivor's low attributes, like wendys fight or ashcans fight/investigate, when duke's not ready. — Django · 3616 5/11/17
correct me if I'm wrong, but isn't the base skill the printed value and skill value after cards like Magnifying Glass or Beat Cop? If Pete has 2 intellect but also a Magnifying Glass and Dr. Milan Christopher does the Shroud value have to be 4, 5 or 6 before being able to commit Rise to the Occasion? — Paphoved · 1 8/1/17
The base value is before bonuses. If Pete investigates himself, base value 2, regardless of magnifying glass, Dr. Milan, or any other bonuses. If using Duke, base of 4. — Faranim · 284 3/28/18
9

This card raises a question with regards to base skill vs skill value. As other people have pointed out, this card will synergize with Dark Horse but not Duke since Duke effects your base skill, but Dark Horse simply grants you a bonus. Given that Dark Horse shores up all the skill icons (, , , and ) it is safe to assume that any other asset that grants a passive icon boost such as Peter Sylvestre or Moonstone would also apply here.

I bring these up because if I am playing Calvin Wright or Patrice Hathaway with their measly 0 or 2 in the majority of their stats, it isn't all that uncommon to find 4 value targets to pitch Rise to the Occasion, putting you at +1, then whatever additional bonuses you gain from your assets or additional committed cards. Coincidentally, running upgraded Peter, Moonstone, Dark Horse, +1 from Dig Deep, puts me at a 9 vs 5 when dealing with Watcher from Another Dimension, and all I had to do was pitch this and spend a resource. What I'm saying is, RTTO gives you one up or at least evens the odds of a particularly difficult test, and then it's up to you to do the rest of the legwork. If the test is important, then you'll be glad to have this card along.

The philosophy of the card isn't to make you succeed though; it's designed to give you a fighting chance at a skill test you ordinarily would have no business attempting. You might wonder why you'd attempt to do something you aren't good at to begin with, but I'd argue that comes up far more often than you might think, especially in solo, and especially if you have specific goals you want to achieve.

This card would be helpful for someone like "Ashcan" Pete because you can only use Duke for Fight Actions, which means you can't use him to break down Locked Doors or to break into the Museum Halls, and don't even think about making a Parley. You also might need just one more hit on enemies with 3 or 5 hit points. Most scenarios do in fact have enemies and shroud values of 4, and sometimes even 5. William Yorick and Rita Young both might like a copy for checks on Treacheries of 5 (combined with Guts, not instead of, is the key. Or like I mentioned, combined with Dark Horse, Peter, etc.) or for tests on high shroud values, especially if playing solo or if there isn't a in the group for whatever reason. Or if you're simply seperated. The rule of thumb is to be 2 up, so in most cases, you'll only need one other card to pitch, but you don't even need to do that if you've got an asset or two giving you passive +1's everywhere.

The trick with this card, I think, is to know which stat you'll intend to use it for when adding it to your deck. If you have 2 , then most likely you'll use it with that. If you have low , then hold onto it for that lethal encounter card. And who knows, you might find yourself facing those rare 6 shroud or combat values, and suddenly you have a shot against something you couldn't have predicted.

This card work realy well with Calvin Wright because all of his base skill values are 0 :)

Of the triple skills available at the time, I think that Rise to the Occasion is one of the more difficult ones to use. If the test is that much more difficult than your base skill level, then this card alone is probably not enough to guarantee a success - chances are you're going to need a little extra help.

Generally speaking, I'd normally rather have Unexpected Courage - it's one less icon, but it's much more flexible.

The exception, of course, is Calvin Wright. With base skill values that are all 0, he can use this card on almost every test. In most instances I think he's going to want to take this one with him!

Since no-one seems to have noticed, ill just point out that this card fits perfectly into any deck using Dark Horse, where it's restriction is suddenly "at least 1 higher". For Dark Horse Duke ("Ashcan" Pete), This is basically the perfect skill card to go with all your passive stat boosters.

Of course, Even for Dark Horse its basically a 3rd and 4th copy of Unexpected Courage.

Thornstromb · 1
No, the restriction doesn't change, and that's the problem; finding tests that are two-over the base value to use it on. His Intellect 2 and Fight 2 mean that you're looking for Shroud 4 locations and Combat 4 enemies, which aren't as common as you'd think. Of course, having Dark Horse does make passing that a lot more likely... — AndyB · 865 11/29/18
And if you use Duke (who traits your base as higher for tests he’s used in), you need to find Intellect/Combat 6 tests. That said, I think those tests are common enough, and Pete decks don’t really have ‘too conditional cards’, just dog food. MINOR SPOILERS: (You are 100% guaranteed to encounter a must pass test Pete qualifies for in every scenario in Night of the Zealot, and very likely to encounter more, especially with certain treacherous that impede investigations... and agendas that increase monster fight.) — Death by Chocolate · 835 11/29/18
It's still a situational card, but Pete is where those shine, because you can always at least throw them at Duke — PartyTime · 1 11/29/18
At one point, I thought that it might good for Finn, to help him tackle the 3 willpower mythos. But even there, in 'normal', with 1 point over the test difficulty, you'll only succed 25% of the time or so... — Palefang · 53 11/29/18
AndyB: it is assumed that you arent performing skill tests if you cant reach a value of at least 0-to-win. Under these conditions, RttO is effectively +1 when applicable. with Dark Horse, it's +1. That's what that meant. — Thornstromb · 1 11/29/18
i meant with dark horse it's +2. whoops. — Thornstromb · 1 11/29/18
0

This Card can be played after Double or Nothing, as it raises the difficulty (if the resulting difficulty is 2 higher than your base value). This card refers to the modified difficulty of a test, not the base value.

Django · 3616
Sadly the FAQ for Double or Nothing says something different. All cards are committed simultaneously. :( — Csys · 1 5/11/17
Where can i find this FAQ? I only know about one for the base game. — Django · 3616 5/12/17
He seems to be referring to the FAQ on the page of Double or Nothing on ArkhamDB. However, I cannot find any other sources that corroborates this. — sgtmook · 1163 5/12/17
Some of the FAQ entries explain existing Rules applied to specific cards, but others seem somewhat out of the blue. The FAQ entries on this website never mention any official source or how the author may be affiliated with FFG, so i'm not sure how to evaulate them, without reading all rules again and how they may effect which card... — Django · 3616 5/14/17
All of the FAQ entries on ArkhamDB are based on either official FAQ entries or correspondence with the designer — jayelbird · 1 8/30/17