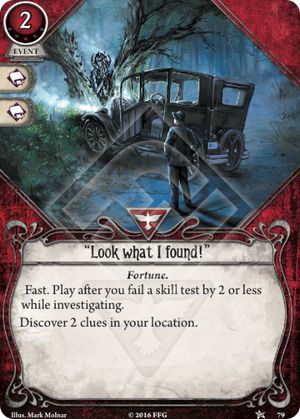 In my opinion, this card has one of the finest artworks of the core set and perfectly illustrates the survivor's feat: turning a bad situation into a good one!

You can play it after investigating in a location with at least 1 clue on it. There are plenty of chances during a scenario to trigger this event. It's greatest plus is that it is never wasted. You merely play it after the attempt, in comparison to committing cards to a skill test upfront!

Fast cards aren't subject to Attacks of Opportunity, so if you are engaged when playing Look what I found!, you only get hit once (for the investigation test).

Special note: if the location has a shroud of 2 or less (after applying all modifiers), you can even play Look what I found! after drawing the -symbol token and resolve the effect!

This card is so good in most decks that it is easier to summarize where it does not shine brightly:

Synisill · 727
That's interersting, if you collect the last clues with the last spoiler card active it remains even though no clues are present? — Django · 3370 6/9/17
@Django: Pretty sure, yes, it would stay, spoiler card "OF" could have been placed on a location with no clues initially, and also would stay. — Synisill · 727 6/9/17
7

I want to add to the other review that in my experience, having "Look what I found!" in hand and wanting to make use of the action-compression is a sure-fire way to just pass all your investigate tests. Seriously. Recently, I even opted as "Ashcan" Pete NOT to investigate with Duke for the express purpose of failing so I could grab both clues, draw a card with Rabbit's Foot, and get out of there. Nope, still passed.