After you become engaged with an enemy: Gain 1 resource.

effect: +1. If this skill test is successful during an attack, that attack deals +1 damage.

"God has spoken. I will do His work without hesitation."
Magali Villeneuve
Dziedzictwo Dunwich #1. 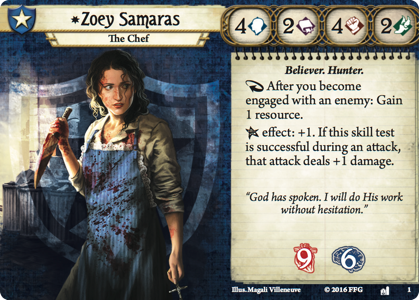 Zoey had known that she was special ever since God spoke to her one night when she was six years old... the night that terrible fire took away her parents. He told her that He had chosen her from among all the people of the world to be His agent. She would protect the innocent and punish the wicked. Since then, He comes to her in times of trouble, offering guidance and comfort. Zoey now travels from city to city, taking work as a chef to support herself. When she isn't working, she stalks the night, guided by the Lord's voice. Wherever she finds wickedness, she strikes it down without remorse or hesitation. 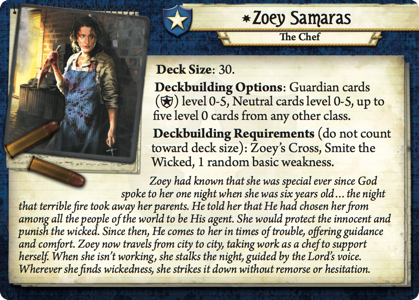 Zoey is the Guardian's Guardian. Roland Banks will try to get clues, using his killing as a means to an end. Zoey kills because things need to die. Her base stats show you what she does - 4 Combat (which is basically 5, as you'll always want a weapon) and 4 Willpower - she survives and she kills. Her investigator ability also tells you want she does. She hunts down monsters and engages them. And then kills them. And then moves on. For players who want a clear cut role on the team, Zoey is a great choice. If a monster spawns, you go to it, and you kill it. If a monster engages another 'gator, you engage it, and you kill it. If a monster thinks about spawning, you make sure it knows you'll engage it, and you'll kill it.

Zoey's weakness, Smite the Wicked, is extremely time sensitive. If it comes up early in the game it's effectively blank. It will spawn somewhere, and eventually, Zoey will find it, and she'll kill it. If it spawns near the end of the game, it's probably just going to become a trauma, because the AP required to go to the farthest location and kill it will likely be better used to complete the scenario.

Zoey's unique card, Zoey's Cross, is yet another indication of what Zoey does. Combined with her effect, it basically becomes "Do 1 damage when you engage a monster." The flexibility and efficiency this gives her can't be understated. Zoey can literally walk in to a location containing a 1hp monster and declare it dead once the cross is out. Monsters with that incredibly awkward 3 HP now become 1 action kills with Machete or .45 Automatic. About the only time you won't want to use the effect is fighting a 2 HP monster, because the 1 damage won't kill it, and won't change the AP it takes to kill.

As a Dunwich investigator, Zoey has a limited but interesting card pool. She can take all the investigator cards, giving her a lot of ability to make things dead, and a very small amount of ability to do much else beside spend AP inefficiently on healing. However, her 5 cards from any class really let you shape her.

Her inherently high willpower makes Zoey a reasonable place to put Mystic cards. In particular Rite of Seeking is a very nice way for her to grab a few clues. Her high WP and focus on killing means that she is extremely well suited to survive the encounter draw that Drawn to the Flame requires, letting her pick up clues for free. She can pick up Scrying to give her something to do with actions when there aren't any monsters around.

Outside of Mystic, cards that give free AP or free clues are usually ideal for her. Guardian weapons are generally all she needs for combat, so shoring up her other duties is usually the best route. She really likes cards like Shortcut and Quick Thinking that grant her free actions and moves to get closer to monsters and to kill monsters. Things like #"Look what I found!" and Lucky! let her attempt investigations and have a much higher level of success. Leo De Luca benefits everyone and Guardians have a relative dearth of allies (Beat Cop is always a nice friend with the cross to do 2 free damage, but he'll die eventually). Working a Hunch gives her access to "free" clues when there's nothing to kill.

Overall, Zoey is about as straightforward as she seems most of the time. She is best paired with someone like Daisy Walker, Rex Murphy, Agnes Baker or Jim Culver who can cover the clue finding and story events while she keeps bad things at bay. But while it may seem like being a one-trick pony isn't that much fun, Zoey is one of the most entertaining investigators around!

Zoey looks straightforward. A statline of 4/2/4/2 leaves very little room for interpretation. You don't fear the mythical, you're not interested in gathering clues, you kill things and you don't run. You get money for engaging enemies, so you get rewarded for what you do anyway.

Therein lie a few pitfalls I fell for. Sometimes, running is the better option. For example after you depleted your last shot on your lightning gun, but before you could play your extra ammunition. Sometimes you need to pass a book test anyway and your inflexibility hurts you. And most of all, you're not gonna be rich. Especially are you getting more money after entering combat repeatedly. But you do want money to get ready for combat in the first place. It's hard to fight an unspeakable monster with your bare fists, and it hurts to play your beat cop after engaging the head cultist.

Guardian is a pretty money hungry faction, as most of their powerful cards are assets costed at 3+. A few of them cost 5 or 6. And you don't get much access outside of the faction cards. And guardian cards reflect Zoey's investigator card. You're bad at clues and bad at running. Rejoice though, as guardians do get some great economy cards. Stand together, "I've had worse", Ever Vigilant are card that can alleviate all this money hunger.

Take great care what you do with your 5 other class slots. It's the same as for all Dunwich Investigators, but Guardian cards are, like Seeker cards, very inflexible in what they're goot at. You get better at fighting things, protecting others and somewhat better at willpower tests. That doesn't mean that you should try Rite of Seeking, since:

Additionally, a lot of Zoey's unique power is in her signature card. Yes, that is a bad thing. Zoey's Cross can do 1 damage at will, since you get spending money for it the very moment you can activate it. This is incredibly useful, it deals with 1 health enemies like Whippoorwills and Rat Swarms better than any other investigator and gives you flexibility to deal that 1 extra damage tha would be left after you swing your Machete, or that 1 extra health left after you shoot your Lightning Gun. And if that is not the case, you can still take the 1 resource. The problem is, YOU HAVE TO DRAW IT FIRST. Unlike Sophie, which starts in play for Mark Harrigan, or the text written on Roland Banks or Tommy Muldoon or anyone else, you may spend half your games without access to the best part of your investigator.

Mataza · 10
I really like Zoey. A guardian who can resist will treacheries is a great guardian, indeed. Spectral Razor is a great fight option for herf, i you're not playing Taboo, Drawing Thin can be an answer to your resources troubles. — mogwen · 210 5/27/20
Mr. Rook worked out great as a meatshield/weapon&cross-finder in my last campaign with Zoey. You just have to pry him out of the cold, dead fingers of your designated seeker first. And you need to hurry before he's tabooed to oblivion, of course. — olahren · 667 5/27/20
Like all guardians ever, Zoey should be using Stick to the Plan. And if she is, a single Astounding Revelation is an excellent use of an out of class slot. — TheNameWasTaken · 3 5/27/20