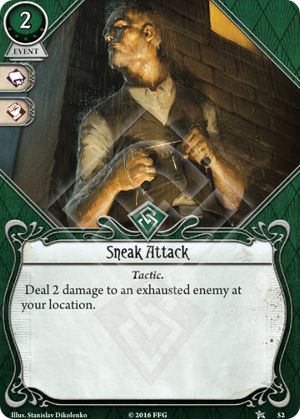 A core set card with no review? Yummy.

Sneak Attack is a cool rarity, the testless damage trick! The funny bit is that you actually need to beat a test, the evade.

The upside to trading a fight test for an evade test is that evades tend to be easier, even so 2 actions for 2 damage is bad rate, so whats the angle? Sometimes you need to evade anyway! Retaliating enemies, perhaps the health pool is too damn big for you to deal with in one turn.

Sneak attack is not a strategy unto itself, it's an element in it, say you play Wendy Adams and don't intend to fight with anyway, Sneak Attack! Say you play in a 3 man team, you evade things and run away to deal with clues, why not soften up the bad guy to make it easier for your fighter to kill? Perhaps you "evade for money" via Pickpocketing and Sneak Attack is a natural combination of cards. Alongside Ornate Bow or Backstab you can deal 5 damage in one round, enough to kill off most foes in the game. Sometimes you just play two copies of Sneak Attack to finish something off, 4 damage for 3 actions, despite the cost and card expense, especially given that the damage is all automatic.

Sneak Attack is flexible, effective, and you'll be glad for it when you draw it, it might sit a bit in your hand and you'll be tempted to chuck it at a test, don't, save it and eventually it'll get you out of a heap of trouble. It slots into builds with many aforementioned cards, Backstab, Ornate Bow, Track Shoes, Peter Sylvestre,Pickpocketing, all the agility based stuff. Stay aware of your cost curve! You dont even need all of them, a character like Finn Edwards for example can supplement a big gun with Sneak Attacks and Peter Sylvestre, using the to pick fights and then tag teams the gun and Sneaks in tandem.

The characters who can use Sneak Attack at it's best and it's build-mates include Sefina Rousseau, Finn Edwards, Wendy Adams. Note that all of these have a special set of skill that makes Sneak Attack really shine, a free evade, repeat-use events, combining the evasion centric elements in the and pools. "Skids" O'Toole can do it but he might not afford it.

The upgrade is a tactical choice, it's lukewarm in solo bot it allows you to boop at enemies engaged with friends, freeing you from the evasion requirement, it is indeed an amazing upgrade, but only if you got friends!

Tsuruki23 · 1266
I must be missing something, but what hinders you from playing this card during the player window in the upkeep phase on an enemy that is engaged with you and has just attacked you? It is exhausted from the attack and it is at your location. You also would not play it during the enemy phase as forbidden by the above FAQ entry. — Zamomin · 37 3/30/20
Nvm. I got confused with LotR rules where you can play an event card during any player window... — Zamomin · 37 3/30/20
You actually can do this now using #Chuck Fergus to make sneak attack fast. Sure, you have to wait for the enemy to attack you and become exhausted, but it saves two actions (evading the enemy and playing sneak attack). — remleduff · 1 10/2/20