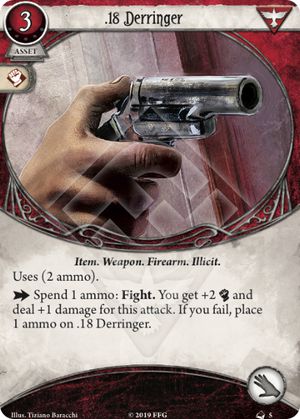 Here are some unique cases for using this weapon:

The only notable point against using this weapon is the low ammo count for the cost, 2 shots might be all you need for the clue getter but a true fighter might still prefer an Enchanted Blade if it's available. Enchanted Blade and .18 Derringer together are a pretty sweet weapon lineup for a flex character.

Combo note: Live and Learn can actually cause .18 Derringer to regenerate ammo!

Note that the upgrade is fantastic.

Tsuruki23 · 1154
Stella Clark of course also doesn't technically lose the action. She just gets another shot at +3 instead of +2 since she gets the action back. And of course if you have other things that work off of fails such as Rabbit's foot, then you sort of start to hope that you will fail so you can get bonuses off the failure. You might as well just push towards it on the first check with your Drawing Thin. — Bronze · 111 8/26/20
Another card that doesn't typically seem to see play to work with her would be "Oops". She would 'miss' but actually land the shot on another enemy and then you would still have the bullet to fire on your original target. — Bronze · 111 8/26/20
To Designer, it make no sense to get the ammo back after fire out. — AquaDrehz · 153 9/1/20
It's a clever design that feels Survivor-y. Once you give up the idea that cards and token represent quntifiable things, it's not a confusing design. After all, how does it make any sense that Grete Wagner bleeds herself to death finding information, then suddely reappears totally fine? Or how often has the Stubborn Detective or Mob Enforcer shown up in the trackless wastes of unutterable Chaos or fractured Time? I mean, I admire their work ethic, but HOW?!? — LivefromBenefitSt · 94 9/4/20