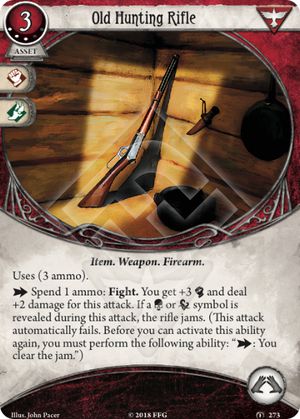 It's pretty good, but not the best.

This gun looks good, with 3 damage and +3, then it looks bad, with that and effect.

Another thing that's easy to miss, this thing is -ridiculously- cheap for a 3-shot weapon with a large bonus and 3 damage. You can easily play this in an asset heavy deck full of 3 cost assets (of which there is a lot in ) or some out of faction options.

That much damage and bonus is great, also the great price, but isn't the gun just completely kneecapped by that effect? Not quite.

Old Hunting Rifle is a weapon the rewards a flexible playstyle combining and , ideally when the gun jams you evade and fix it, the missed shot can be recursed with cards like Oops! or Live and Learn so the gun does get good support from the faction. Will to Survive is nice but not always needed (although recommended if you intend to kill a boss). Edit: Eucatastrophe circumvents the autofails pretty beautifully.

The two stat reliance means that a classical combat specialist like William Yorick probably wont want one unless he's got all the support cards too (also Bandolier and Act of Desperation), characters like Silas Marsh and Rita Young however love them some Rifles.

One problem for 3 damage weapons is 4 health foes, in this instance it's good to have a high base and perhaps a Lucky! and/or skill cards handy to try and land a basic punch, Rita Young has a little advantage here thanks to her ability, which lets her simultaneously get distance to fix a broken rifle and damages the enemy.

"But random person on the internet," You might say, "dont Silas Marsh and Rita Young prefer Ornate Bow?!" Yes, the bow has more ammo in the end, and it might very well be more dependable, but the reliance on reloading seriously dampens what you can accomplish in a round, it's much easier to get the rifle to do 6 or 9 damage in a round. Rita in particular has no access to bonus actions outside Ace in the Hole and even that's just a one off, so despite her higher she actually might prefer the Old Hunting Rifle a bit. The big difference between the Rifle and Bow boils down to a lot of splitting hairs, the really fun thing is that you can take them both!

Old Hunting Rifle isn't the best weapon in the game, it's risky, but it is very destructive and extremely cheap.

Tsuruki23 · 2231
I think the risk still outweighs the benefits, especially with only 3 ammo and no empty hand for a secondary weapon. — Django · 4140 9/3/19
Hold on to a Eucatastrophe and this is sort of like a cheap almost Lightning Gun. Another reason to play Eu with Yorick. — StyxTBeuford · 12699 9/4/19
@StyxBeuford Eucatastrophe helps against the auto-fail, but not the skulls, since the skulls aren't tokens that reduce your skill value to 0 - they are tokens that trigger an ability on the card and THAT ability reduces your skill value to 0. — Death by Chocolate · 1131 10/17/20
@DeathbyChocolate a plain reading of the rules does seem to support your interpretation. do we have an official ruling on this? — 11zxcvb11 · 3 1/22/21
I guess, @DeathbyChocolate is wrong. Firstly, if it doesn't work with skulls, it also doesn't work with tentacles since the card specifically modifies both these tokens for some specific result. Second, the card explicitly says that jamming means "this attack automatically fails". Than we are checking the rules: "If a skill test automatically fails, the investigator's total skill value for that test is considered 0". With +3 Fight from the gun itself it's highly unlikely for you to have "0" fight when you initiate the test, so your skill value is reduced to 0 due to revealing test modifier (either skull or autofail). Eucatastrophe should work. — chrome · 12 7/13/21
12

The fun part is that when it jams, while shooting an enemy engaged with your partner, it still sort of "shoots" him :)

Dear FFG, this is a terribly Arkham-ish outcome :) C'mon, it jammed! It ain't gonna hurt my friend :)

But jokes aside. Is it any good? Well, it is very good at killing enemies with 3 hit points. Now this is of course great, since 3 is the new 2. And you're doing that with a bonkers bonus of +3 BUT:

So not only you need an action to unjam it, that grants you a sucker punch from the enemy, but you also lost a precious shell and 2 actions. And recently enemies also like to Retaliate. So... it's a no-no in a lot of scenarios.

But let's find setups in which it may be good, I'm certainly not iterating through all possible options, but what I thought is:

Am I missing something?

Onetribe · 273
Maybe... You are Calvin, you need some heavy destruction tool and you plan to run Against All Odds anyway - you can combo it with OHR for a sure strike; you are Silas, have cool combat stat but the only reliable weapon you can have is Fire Axe so OHR is the second best Survi weapon (unfortunately for OHR some good neutral weapons were released in FA cycle). Still you are right - jamming is painful. Maybe sealing teammate is your uncle? Anyway, that note about pseudojamming during a friendly fire rocks :D — KptMarchewa · 1 12/4/18
I think it’s a good point that this weapon can leave you high and dry against enemies on occasion, so having a high Agility is handy in case of emergencies. Other than that, the big thing I think you missed is Will to Survive, which when paired with this gun will shred through a stack of enemies or a boss. — Death by Chocolate · 1131 12/4/18
If you are Wendy and you aren't really using hand slots why would you not play Ornate Bow instead?? — matt88 · 2534 12/6/18
Side note, baseball bat does not automatically fail with skill. This weapon is just bad on so many levels... — Django · 4140 12/7/18
I was thinking about adding this to an aggressive "Ashcan" Pete deck. The gun raises the terrible two fight to a decent 5 (or 6 if you have a beat cop in play/Dark Horse). If Duke is in play, you aren't as desperate if the gun fails. What do you think? — brerlapine · 19 9/12/19
Wait a minute!!! Will To Survive and Old Hunting Rifle is better than a Lightning Gun. Let that soak in... Survivor has a guaranteed 9 damage round. INSANE — brerlapine · 19 9/13/19
Rita with Ace in the Hole and Swift Reload actually has a guaranteed 15-18 damage round O_O — Zinjanthropus · 205 5/26/20
2

The first ever interesting upgrade for survivors is...(drumroll)...not that good. Well it's good until it's not, then you're in a lot of trouble (barring a reliable self-eject button). I'm still holding out for a chainsaw. They have to make it eventually, right? And it would be for survivors. But that could jam too.

Rita Young + Old Hunting Rifle + Swift Reload + Stunning Blow = lots of fun and lots of hurt for the other guy...throw in Oops! if you wanna cover your butt!

Did I mention Easy Mark in there too, even to get to 200 characters?