After a skill test at your location begins, exhaust Crystal Pendulum: Name a number. If this test succeeds by that number or fails by that number, draw 1 card. 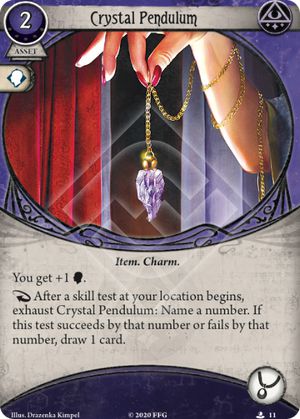 The best comparison is to Holy Rosary. Same cost, slot, tags, level etc. The difference is you're trading away 2 Sanity for possible card draw each turn. The question is then how often will you draw the cards? If you are doing chaos bag manipulation then this card is great but what about a standard mystic? That depends on the bag composition.

Its important to notice that you will succeed on a Pass or Fail by that number so to figure that out you have to do some math. First off it fluctuates due to scenario effect tokens having different values each scenario but I'll create a bag as an example.

Though the bag may be quite different from this its not unreasonable to say that you'll probably succeed 1/3 of the time. So now you're trading 2 sanity for an unreliable extra card every 3 turns or so. I think it really depends on your deck composition and if you need that extra sanity or not. If you're taking the spells that give you horror then I'd recommend the Rosary. If not, then I think I'd probably prefer the Pendulum.

kamiidude · 4
It is also worth noting that this combos with Scrying Mirror. Since both trigger at the same time, "After a skill test at your location begins", you can revolve Scrying Mirror first and guaranty some draws. — Gnarls Apprentice · 1 7/17/20
it also combos with Premonition — Zinjanthropus · 157 8/22/20
I'm not clear on how this card works. Am I supposed to guess the token modifier that will be drawn, or the final amount I failed/succeeded by? EXAMPLE: Willpower test difficulty 3, Jacqueline has 6 Willpower. She currently is at +3 above the test difficulty. If I think I will draw a "0" token, then am I supposed to say "0" or say "+3" because I will be passing the test by +3? — VanyelAshke · 138 12/20/20
Other than Premonition which allows you to see the next token drawn, I'm not clear on how to make Crystal Pendulum reliable/good? Is there a certain number that is best to guess? Scrying Mirror and Premonition combo well due to the timing window, but what about the rest of the time, or if you're not playing Scrying Mirror? Olive McBride makes you resolve 2 tokens, so there's no way to know with certainty what to guess for Crystal Pendulum. Dark Prophesy is random as well, no guarantee. I struggle to understand how to get value from this card, outside of playing Premonition and Scrying Mirror. — VanyelAshke · 138 12/20/20
@VanyelAshke, Ritual Candles help. — FBones · 12087 2/14/21
2

As Gnarl's Apprentice and Zinjanthropus have noted in the comments, this card will work with Scrying Mirror and Premonition. And if it combos with those, then you can also use Dark Prophecy and Olive McBride as well, making the card draw an all but guarantee when you want it. You can also use Recall the Future to ensure a success. This makes it an incredibly powerful tool and worth considering in anyone who is going to pack even a few chaos bag manipulation effects.

Scroll of Prophecies has rapidly become a mainstay of mine, and I suspect it will continue to be so since it occupies the much less congested Hand slot. However, the Pendulum is cheaper, does not require an action to activate, and doesn't force you to discard. All of which are incredibly valuable traits that cannot be overstated. The reason the scroll works so well is that you're generally comfortable discarding something; I am anyways. And if that's the case, it means there are key cards in your deck you want to have down; the rest are just candy.

The Pendulum will help you draw up those axis cards you want to see as well as grant you that sugar rush I mentioned, and the boost ensures you aren't sacrificing your accessory slot. Really, the only downsides to this card is it will be inconsistent when you don't have tech to help see the tokens, and not all the tech is full proof. You could replace this with a different accessory once you've dug up those essentials, but again, that +1 means you don't have to.

This is an exciting card that plays well with the guesswork approach. 's have been a bit starved for card draw but that is changing. Crystal Pendulum is a welcome addition that makes your jewelry of choice all that much more competitive and rewarding.

EDIT: One thing I did not mention originally is that even taking a gamble is not hugely risky, and not simply because there's nothing lost if you guess wrong, but because you're guessing the modifier, NOT the token. Unlike Recall the Future, the Skulls could be say -1, which is a popular token already. You're statistically more likely to get the card draw in this way, and seems to be an improvement over Recall the Future.

LaRoix · 1421
The big caution with Pendulum is that it obviously competes with Rosary. Rosary is a better option, I think, if you are using suites of spells and not any real token pulling mitigation, since the horror soak is super relevant and the draw will trigger not often at all. In fact, I think the way I'd very loosely play it is Pendulum should pair with Olive while Rosary should pair with Initiate. That said, I could see myself Relic Hunter-ing for both. — StyxTBeuford · 12385 9/5/20
I actually found it a bit tricky to use with Olive, because she resolves 2 tokens, so it can be kind of unpredictable what the modifier will be. Still make sense in the same kind of decks, though. — Zinjanthropus · 157 9/5/20
2

One thing to note is that Ritual Candles improves your odds of connecting with this card because you can choose to use Ritual Candles ability after seeing the token, giving you a little flexibility with your call.

Also Jacqueline Fine gets extra use from Crystal Pendulum because she can opportunistically select which token to keep.