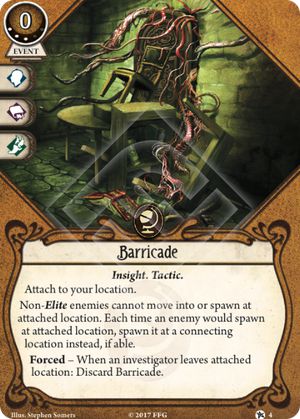 I've never liked the 0-lvl Barricade, neither have I seen any necessity to add it in any investigator's deck. But this updated version seems to have some potential. Let's try to find out: does it? For a price of a one card draw and an action you:

chrome · 33
I have a doubt regarding the errata. It replaces the whole constant ability? So that enemies can move now into the attached location? Or it just replaces the "Each time..." part? — mborda · 1 9/28/19
the latter, I believe. Otherwise the card is even worse than the 0-lvl version. It looks like they just tried to fix the wrong wording they had initially, making it clear that the 2nd part, as well as the 1st one which is not excluded, also refers to non-Elite enemy. — chrome · 33 10/7/19
Just the latter. Several of the taboo changes have had the same format, where they only include the changed text. — Cityface · 7 7/2/21
2

This review is coming atcha from a fellow who has never used this card. I therefore speak with all the confidence and all the experience of a political pundit.

Here's my golden dream: couldn't this card be the ultimate answer to enemy control? Now that it also prevents monsters from spawning at its location, when you are camped out in your barricade, you WANT to draw monsters. And there are cards that can help you do it. If you're a couch-bound Rex, you could take a couple copies of On the Hunt and "Let me handle this!", and greatly increase your chances of drawing monsters or taking friends' monsters. Your buddies can help with cards like Scrying, "You handle this one!", and other encounter deck manipulation tools.

What happens to those monsters bouncing off your bunker roof? It's embarrassing for them, but they just sort of pile up. The hunters are totally neutered, because despite your inaccessibility, you are always going to be the closest investigator, and therefore, unless their instructions say otherwise, they will try to hunt you. Even if there is another investigator just as close, the rules still allow you to designate yourself as the target (again, unless special prey instructions dictate otherwise) And so, on the enemy phase, they will pathetically nose around your impenetrable cocoon, accomplishing nothing, while your friends clear the board of clues.

The advantage of having the vast majority of monsters drawn do NOTHING at all doesn't really need to be spelled out. It's so good, that it's almost worth it in a four player game to have one person just camp out and do nothing but try to draw enemies. But of course, as we all know now, it's possible to work remotely. All investigators with access to Barricade also have access to In the Know, Seeking Answers, and Pendant of the Queen, among other tools. Connect the Dots chains very nicely with In the Know, allowing you to gobble clues efficiently from the comfort of your little sanctum. And though In the Know will run out quickly, there are ways to recharge it: Truth from Fiction, Enraptured, and Eldritch Sophist, specifically.

To me, the question is, how many scenarios give you the luxury of camping out like this? Obviously in scenarios like Essex County Express, it's a no-go. It's worthless in The Miskatonic Museum, because the only enemy in the deck is elite. But take a scenario like The House Always Wins. How cool would it be to chill in the Clover Club Bar all game? When the first abomination spawns in the Lounge, rather than making for a beeline for your compatriots in the back rooms, he'll just lurk around the lounge, giving you dirty looks and maybe kicking over a table every now and then. When the second abomination tries to show up in the bar, he'll find himself ignominiously shunted into the lounge instead, thus doubling the stupidity. Maybe you'll be lucky enough to draw the third, so all three stooges can chill there together. The only potential complication is the damn Clover Club Pit Boss, who is elite. The team needs to find a way to make him hunt west rather than east, possibly tough to do if you are the seeker...

And now my dream ends, and I await the rude awakening which I'm sure will be delivered to me by the first commenter!

Mordenlordgrandison · 384
Sometimes you pop this card in the game, or the level zero version, and the encounter deck grabs you and moves you to a central location. And the person who likes it most, Luke, can’t go into the dream realm once he’s entered a barricaded location. So the “ultimate answer to enemy control” is more like a specific answer, at the end of scenarios where you all want to be at a location, but there’s not a boss there. — MrGoldbee · 1302 12/23/20
I think most maps are just not going to lend themselves well to using Barricade in this way, because to work you're not just cutting off access to the barricade place for the other people but also the place you're proposing to stack enemies. I think the House Always Wins is pretty ideal in the Dunwich Legacy, and there are lots of ways the bunker can collapse there. Other investigators drawing Hunted Down is one way, the Pit Boss is another and you need to leave to resign, for the most part too. Extracurricular activities seems hard to make work without either barricading or stacking monsters someplace people need to be , especially once the experiment is involved. It won't work in the museum or the express, and aside from the cramped map in blood on the altar, if you set the bunker up in the location that turns out be hiding the key then you have to leave at that point to complete the scenario. U and U has a cramped map where barricade + monster stack might well massively limit other people's movement and make it harder in a number of ways to reach the broods. Spaces Between will wreck barricades in non Sentinel Hill locations in Where Doom Awaits and you need to leave the Sentinel Hill locations to complete the scenario. And Lost in Time and Space has many many location issues. And that's leaving aside doom - enemies, things like Etzli Guardians, weaknesses that can mess it up , situations like the Unspeakable Oath or the Doom of Etzli and prey issues. Even in the House always wins, if you're not the person with the lowest will that person is gonna have to stay 2 connections away from the conglomerations of spheres or they'll attract them away from you. And even then, other investigators still might draw the enemies in the first place. So I think there are so many ways your barricade could get compromised that it's not a reliable way to deal with enemies. And if you have a way to defend yourself, why not just kill the enemies in the first place, avoid the risk of a stack of horrors and get the VP? — bee123 · 24 12/23/20
Or just use Gloria and never spawn any enemies, period — bricklebrite · 405 12/23/20