Fast. Play after you discover the last clue at your location.

Discover 2 clues at a location with a lower printed shroud value than your location.

They thought you were being unreasonable. Paranoid. Delusional. Turns out you were right all along.
Quintin Gleim
Przerwany Krąg #25. 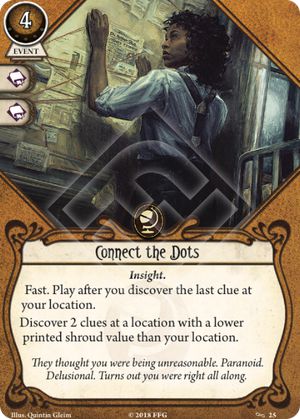 Often in Arkham, the best strategy is not to gear up so you deal with anything, but to get stuff done before the "anything" actually shows up. That usually means snagging clues fast -- in particular with cards that give you nice two for one deals. Seekers are especially blessed in this regard. At level zero, they have Fingerprint Kit and Deduction -- both of which give you an extra clue for a successful investigation while also increasing the odds of the skill check. Connect the Dots has both a higher ceiling and a lower floor than these other two options.

Let's start with the floor. The nice thing about the Kit and Deduction is that they can be used any time you investigate. For sheer simplicity, nothing beats Deduction: as a skill card, you can attach it to any investigation attempt, and net yourself that extra clue. Connect the Dots, meanwhile, requires there to be at least two revealed locations in play with clues on them. In some scenarios, like the Essex County Express, this will almost never happen. CtD also gives you no help with the check, and requires you to do your investigating at the more difficult location. All heavy burdens. At 4 resources, it's also tied for the most expensive seeker event in the game.

But the ceiling is positively Sistine! Three clues for an action is an amazing yield for a level 0 card, and the savings often go beyond that. If the second location is located somewhere inconvenient, you may be saving move-actions as well. If there are enemies camping on your clues, you're saving fight or evade actions.

Sometimes these perfect situations will simply present themselves, but a little planning can help as well. If this card shows up in your opening hand, for example, you may want to nudge the party to fan out a bit so you can plot out how best to deploy it. Since you'll likely be investigating at a high-shroud location, stocking up on Lore icons isn't a bad bet either. But you needn't stress out too much. Unlike the dazzling but somewhat unwieldy Deciphered Reality, you don't play CtD until AFTER you've passed your investigate check, so there's no risk of wasting your four resources. If your check went sideways, simply try again.

Happily enough, this card doesn't have to replace your other multi-cluevering tools; in fact it synergizes quite nicely with them. Imagine this lovely scenario. You're at a three-clue location, and somewhere else on the board are a couple of clues that -- like a bag of Doritos in the cabinet -- you want, but don't want to have to go get. You use Fingerprint Kit to investigate, tacking on Deduction for the extra icon, and of course, the extra clue. You pass, thereby sucking up all three clues on your location at once. But you're only just getting started. You then drop CtD, and two more clues wing their way across the map to you like falcons to the arm of the falconer. Yes, you just snagged five clues on a single action, and you didn't need a single experience point to do it.

Mordenlordgrandison · 327
One of my favorite Seeker splash options for Tony. Especially now with Gregory Gry it’s easy to pay for. — StyxTBeuford · 12586 12/26/19