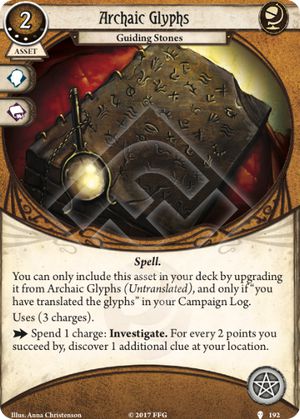 An enormously strong card that encourages Seekers to build around it in multiplayer games. By itself, it will probably only net you one, maybe two extra clues at best, and that is assuming the chaos bag doesn't entirely hose you.

Every resources invested in Higher Education while using Guiding Stones essentially picks you up an extra clue (assuming you don't auto-fail) which is immensely strong in multiplayer. Rex especially, who has access to Burglary, can generate up to 4 resources and 1 clue with a single action (Burglary + Dr. Milan Christopher) and then follow it up by picking up 4 to 8 clues with Guiding Stones depending on shroud and chaos token drawn. Other Seekers can't generate resources quite as quickly as Rex can, but anyone with access to Dr. Milan should be able to have powerful turns with Guiding Stones.

Minh Thi Phan is runner up for using Guiding Stones well, as she gains +4 Intellect from Inquiring Mind and potentially +5 from Desperate Search. Playing at 3 or less Sanity is pretty dangerous, but a little more manageable for Seekers now that they have access to Logical Reasoning.﻿ And a Minh deck filled with skill cards will probably have more free resources to spend on Higher Education than a Daisy deck will.

Just don't bother playing it in solo games, as locations simply won't have enough clues at them to take advantage of the power of Guiding Stones.

menionleah · 70
One interesting interaction is that Book of Shadows (1) can be run put of Daisy alongside this card, allowing unlimited use of this effect. Could be a potent combination, if a bit janky. — Low_Chance · 6 5/15/18
You don't even really need Higher Ed. With Field Work and Inquiring Mind, you've got a pretty good chance of getting 3, maybe even 4 on some locations (Suppose it's a 3 shroud and you're already at 4-5 or so). When you enter Key of Ys / Double Mag / Death territory you can make some pretty powerful plays. Inquiring Mind combos well with this. — Zinjanthropus · 205 3/3/20
There is another reason, why this card is particular great for Minh: it makes her "King in Yellow" rather a non-issue. Just try to get rid of it, while doing a Glyph-enhanced investigation. You naturally want to overcommit for both tasks. — Susumu · 211 6/27/21
2

I think The Skeleton Key should definately part of the conversation. I played a duo game with Daisy Walker and Preston Fairmont. Preston moved the key around & Diasy and stripped the clues from every location with Deduction, this card, and Perception.