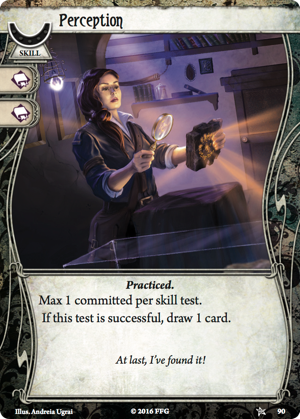 If you take a closer look at the popular decks here on Arkhamdb, you may notice that still most of them use a complete set of Guts, Perception, Overpower and Manual Dexterity. I omit Unexpected Courage here, because it functions a bit different.

These cards' popularity is based on their marginal cost and the high versatility they give you. Each of them occupies one deck slot, but there is (on Standard difficulty) a huge chance of drawing another card, so it feels as if they cost nothing. They kind of "replace themselves instantly". Whatever strategy you are running, tests over all four attributes will meet you at every corner (or in every Mythos phase) and you don't have to commit these skills to a particular kind of skill test. The above-mentioned reasons, as a sum, virtually "reduce" your deck size and enable you to draw your key cards much faster. In fact, playing them includes two slight risks:

Synisill · 775
There is another weakness - which is that you are never forced to make a test of that type, and the card sits unplayed. This can happen for Manual Dexterity more than Guts, and for Perception/Overpower for people not searching/fighting. I think you always want Guts and 1 of Perception/Overpower though. — duke_loves_biscuits · 1137 6/28/18