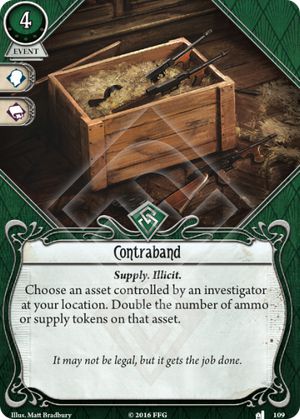 This card has been disregarded as too expensive and ineffective. I will have to agree that at low player counts this might be truth for reasons already stated in previous reviews. At high player counts though it can be a strong asset (I mean event), specially on highly specialised investigator teams that rely mostly on 1 investigator to deal most of the damage in the mid-late campaign.

The more ammo/supply tokens you already have on an asset, the more value you get out of this card. For this reason it requires some good teamwork and planing to find the best window of opportunity to play this card. If you time it right you can be adding 10+ bullets to the big gun of your fellow guardian with Contraband. Here is an example how this worked in one of my 4 player games:

If used right Contraband is an amazing team combo card that can grant your guardian a big gun with almost unlimited ammo. Someone who doesn't have much experience playing at higher investigator counts may now be thinking "that's unnecessary, you don't need that much ammo". To that I will respond that at 4 players the encounter deck recurs very quickly, which can result in a constant flow of 3 hp enemies every round and if you are on the last scenarios of a campaign you will most probably be facing a boss (sometimes even multiple bosses with 20+ HP!) and maybe, only maybe, also one of those damn enemies that come back from the grave (I mean victory display)! So yeah the extra bullets are not only welcomed but sometimes even necessary.

In conclusion: The main function of this card should be to grant your guardian an almost unlimited amount of ammo for his big game gun. This is a powerful strategy at high player counts because of the constant flow of enemies and specially if you are relaying on a guardian to deal most of the damage for the team. Some cards that are not playable at lower player counts can be amazing at multiplayer...which makes trying different player counts a fun experience.

Alogon · 580
I run a copy of this under Leo’s Stick to the Plan in my all blue 3’s game. We love playing this on my Flamethrower or Caroline’s First Aid, especially if I’ve gotten to trigger Venturer a few times first! And yes, we use every drop! — Death by Chocolate · 487 3/28/19
Now, with the upcoming Sixth Sense, Sefina will not necessarily need her hands for Lockpicks, making Ornate Bow a more desirable option. — mogwen · 210 3/30/19
I agree...but what has Sefina and the Ornate Bow to do with this review of Contraband ? :P — Alogon · 580 3/30/19
Maybe because something strange happened because I was commenting on Ornate Bow! ;) I was surprised not to find my comment on Ornate Bow, now I found it! — mogwen · 210 3/30/19
On contraband I like your review, it shows how rogues can use their wonderful resource generation into something useful for the whole party! Rogues don't have to be selfish investigators, they can be good support characters. — mogwen · 210 3/30/19
Correcto :) — Alogon · 580 4/4/19
Also combos well with the M1918 BAR. Get 16 ammo for one and then multiply that to 32 ammo with the second one O_O — Zinjanthropus · 96 3/15/20
5

I think this card is gaining new life after the introduction of the M1918 BAR. Sure, it's ain't cheap. But in curent cardpool only 2 investigators can use this combo. Leo Anderson, who has access to a Lonely Wolf and Hot Streak(2), and Zoey Samaras, who gain resource when engage the enemy (and She can use Lonely Wolf as well). I finds M1918 as an excellent card for both trash mobs and bosses, but it requires a different approach than Shotgun or Lightning Gun. Both Venturer, and Extra are Ammunition pretty bad for M1918 BAR, and without Contraband, this card will not show its true potential.

Contraband is a rather inefficient Rogue card. Its best use is certainly in multiplayer. If you can add 2 ammo to a Guardian's Shotgun, that's decent. It's hardly great, though, because you're spending 4 resources and an action to do it. In terms of actions and resources, that's almost as expensive as just playing a second Shotgun! If you play it after Extra Ammunition has been played, that's better, but now we're talking about a really slow and clunky multi-card combo.

Moreover, if you draw Contraband after the Shotgun has already seen some use, then it's useless. It doesn't do anything if your friend's Shotgun is out of charges, and it's pretty lame if it only has one charge left.

So currently, none of the Rogue cards with charges are sufficiently useful or expensive that Contraband would make any sense. That makes this card multiplayer-only, and a rather questionable pick even then. But it is totally possible that we will see some new expensive cards in the future that justify the presence of Contraband, slow and expensive as it is.

Note that this card does not work with Shrivelling, which doesn't use ammo or supply tokens.