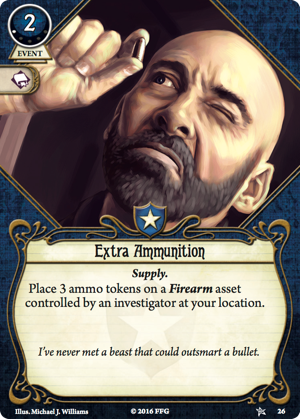 "Hey, Mischa, any chance you could use these for your Lightning Gun?"

Most people would argue that Extra Ammunition is a superfluos card and add an extra weapon instead. While most people are not wrong with their assumption, real heavyweights would sneer at their faint-heartedness and put in the Extra Ammunition anyway.

Extra Ammunition does not do anything on it's own, it costs 2 resources and 1xp. Compared to Contraband it not only saves you 2 resources while providing roughly the same effect, as most firearms bring 3 initial ammunition, but, even better, playing it is not time-sensitive. You can restock an empty firearm as well as a fully loaded gun, bringing it above it's initial value.

The Shotgun is unquestionably the most economic use for Extra Ammunition, closely followed by the Lightning Gun. Then there is also this unique combo from FBones, the only deck here on ArkhamDB that heavily relies on reloading the Chicago Typewriter. The more expensive the weapon, the more value extra ammo gives you!

And, of course, Extra Ammunition gains a little extra value in multiplayer games where you can charge your fellow investigators' weapons!

The best guns in the game, things like Lightning Gun or Flamethrower, cost huge amounts of experience and have limited uses. Extra Ammunition is essentially buying 3rd and 4th copies of those guns for only 1xp and 2 resources. Guardians have access to cards like Stick to the Plan and Prepared for the Worst to thin out their decks and search for these big guns fairly reliably, and that makes it a straightforward inclusion to add Extra Ammunition to these decks as well.

With only 6 shots of lightning gun, you have to worry about how you're going to deal with the rest of the enemies in the game. With 12, you're feeling a lot more comfortable. This shouldn't be the first card you buy in a Big Guns Guardian deck, but it absolutely should be one of the cards you buy.

RatherIncoherent · 3
Don’t forget that since it’s a supply you can also get it with Backpack (especially the level 2 version) which will dig dee for your expensive guns, Emergency Cache’s to pay for them, and Extra Ammunitions to keep them full). — Death by Chocolate · 1170 8/29/21