Revelation - Put Self-Destructive into play in your threat area.

Forced - When you deal 1 or more damage to an enemy: Take 1 damage. 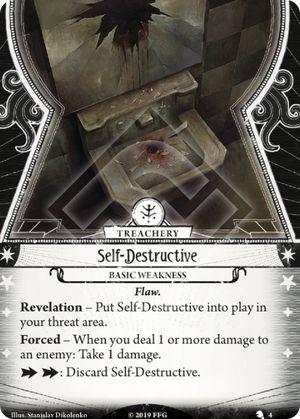 While this is certainly a fun and interesting weakness for Nathaniel Cho and other guardians, or fighters. That much isn't the case for decks that mainly focus on clues, I would advice you to draw a different basic weakness if you happen to draw it with one of those decks. Fighter type investigators usually have a larger health pool, but Self-Destructive can easily trigger twice on a turn in multiplayer, so it's comparable to Internal Injury in impact I think.

The fact that the impact of this weakness varies so heavily does raise an interesting question: "should Fantasy Flight restrict the basic weaknesses a character can draw?". I think the answer is yes, and they could just put it under deckbuilding requirements e.g. no pact weakness. And for characters who have multiple obvious archetypes, not all of which are impacted, probably also restrict their weakness pool to cards that are highly likely to be at least somewhat impactful.

All in all I rather like this weakness (for any deck in which it has any impact), though it does fall into the, frankly massive, suite of weaknesses with remove bad effect. I find that these weaknesses often still linger in my threat area, as two actions can be a steep cost if you have to deal with monsters or you just have to hurry up to progress through the act deck in a timely fashion.

AukeRosier · 3
I would very much be in favor of house ruling which weakness an investigator can take, but I'm not sure if it would be a good idea for FFG to try to do that. Seems very complicated. Besides, weakness traits don't really correspond to this. Compare this Flaw to Indebted, for example. Very different weaknesses. — Zinjanthropus · 157 9/7/20
I agree with @Zinjanthropus. I once drew Uspeakable Oath (Curiosity) for Ursula, which was kind of ridiculous, but it's what the Randon Basic Weakness coughed up. It still caused me a little excitement in some scenarios. — LivefromBenefitSt · 536 9/7/20
Unspeakable Oath (Curiosity) is sort of funny in Ursula, because she is already investigating a lot of empty locations to deal with her signature weakness, and can use her extra action for it, anyway, so often times it costs you no actions whatsoever to deal with. — Zinjanthropus · 157 9/8/20
Most investigators will have to deal with enemies at some point, but the investigators least suited to it also tend to have poor health pools. In multiplayer they will also be tempted to leave this alone -- since the plan will be that they don't ever fight. Which means that when they do get stuck with an enemy they can't possibly evade, with no one able to reach them in time, they'll get this nice bonus damage for their trouble for each damage they do manage to land on the enemy. I say let the random basic weaknesses be random. Otherwise you miss out on these natural consequences. :) — Yenreb · 9 9/8/20