You get +1 while fighting.

After you defeat an enemy, exhaust Boxing Gloves: Search the top 6 cards of your deck for a Spirit event and add it to your hand. Shuffle your deck. 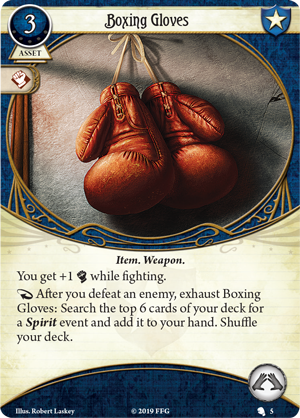 This seems like a card that only does the thing it appears to be designed around in one deck -- namely, the Nathaniel Cho starter deck, where almost all of your fight actions are going to be from playing an event (or just a basic melee to finish off odd-health enemies).

For other investigators, the Boxing Gloves make an awful main weapon. But that doesn't mean they're useless, since if you can include Boxing Gloves in your deck you can include Bandolier and another Guardian weapon (even a two-hander if you use upgraded Bandolier). That +1 while fighting works while you're using another weapon (as does the search effect), and while having to find your Bandolier (and forego the use of an investigation tool) first makes them harder to play than Ace of Swords, there are probably decks that would love to run both.

Thatwasademo · 32
Ashcan Pete can take Boxing Gloves and have +1 when fighting with Duke. He has access to a lot of spirit cards! — Zinjanthropus · 155 5/7/20
Don't forget Reliable (1) as well as Ace of Swords when comparing to Boxing Gloves. All three potentially stack but again you need to jump through Bandolier-shaped hoops to use Boxing Gloves effectively. The Ashcan Pete interaction is amazing, take this and St Huberts with desperate skills and you've got a deck. — The_Wall · 188 8/30/20
"While resolving a triggered ability on attached asset, you get +1 to each of your skills." Reliable doesn't work on gloves. — MrGoldbee · 512 9/21/20
I don't think the suggestion was to attach Reliable to the gloves, but to attach it to your main weapon instead of playing bandolier+gloves — Thatwasademo · 32 9/28/20
I wonder, if this is viable or even good on Diana. The interaction with upgraded Bandolier seems less clunky, because she looks out for Willpower buffs anyway. And she loves a whole lot of Spirit events: "Ward of Protection", "I've Had Worse" (2), "Uncage the Soul", "Eldrich Inspiration", "Delay the Inevitable", "Stand Together" (0), maybe even "Blood Eclipse" (1) and/ or "Solemn Vow" with Brother Xavier, who buffs willpower as well. — Susumu · 5 10/13/20
0

At first glance, boxing gloves seem almost offensively bad. Compare them to machete: One fewer hand slot, +1 damage, and the same boost to attack, at the cost of some draw power? Of course, Spirit events are quite common in Guardian (with Stand Together being the best, perhaps), but with Boxing Gloves it's extremely important to consider the opportunity cost of two hand slots. Barring some Bandolier shenanigans, you aren't going to be dealing more than 1 damage with non-event attacks. This game is balanced around dealing 2 damage with those attacks, so you're going to need to play +damage events or skills whenever you need to fight. And with the Guardian's notorious lack of early economy... event based fighting doesn't seem particularly good outside of Nathaniel Cho.

This game is balanced around dealing 2+ damage per attack. I have a feeling that even Cho is going to want to grab Machete or Enchanted Blade and leave the Gloves behind.

dichromate · 9
I think the "+1 while fighting" is super interesting; as the other review notes, it improves your other weapons' fight actions (let's ignore the flavor implications there). Still clunky, but very interesting. — SGPrometheus · 278 4/11/20
Nope! — MrGoldbee · 512 11/5/20