Revelation - Put Dendromorphosis into play in your threat area. It cannot leave play while it has no damage on it.

Card design by the Botanists at Arkham Nights 2018. 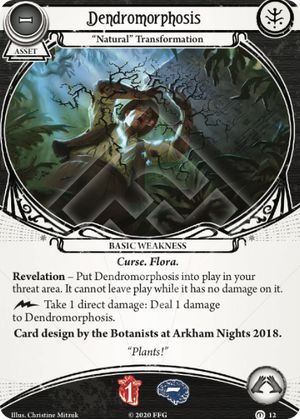 Pretty nasty basic weakness that sends any item that takes a hand slot directly to the discard pile.

This guy, and many combat oriented investigators, hates it with a passion.

The only way to protect yourself is to have an asset in play that increases your hand slots.

Icing on the cake, you can't really discard it if you only have 1 health left, unless you can last until the end of time.

Kwaice · 2
I saw Tommy being quoted and I had this chaotic thought of him shuffling it back into his deck. — toastsushi · 62 9/24/20
You can assign damage normally on it (like you would on any damage soaking assets). The Free trigger ability on it is just there so if you need your hand slots immediately you have the option. — ak45 · 281 9/24/20
For Mystics, this card can actually be quite helpful! They usually have no need for their hands lots and the extra health this Asset is pretty useful since Mystics tend to have low health. — Nenananas · 25 9/24/20
Because it's in your threat area, other investigators can trigger the ability on it, right? I also assume that even though it's in your threat area, it can still soak damage for you because it's an asset, but I could be wrong about that. — ArkhamInvestigator · 227 9/24/20
It's in your threat area, but still under your control, so yes you can just block an attack with it. And, since it's in your threat area, abilities on it are available to investigators at the same location. — Thatwasademo · 31 9/25/20
Also yeah, this card is hilariously easy to deal with if you're not using your hand slots -- mystics have a few hand slot items that are fairly common, but most builds could easily just replace those when upgrading; I also tend to run Preston Fairmont without hand items. — Thatwasademo · 31 9/25/20
Somewhat counterintuitively, Dendromorphosis being in a threat area does not allow other investigators to trigger it's ability. Rather, investigators may trigger abilities on *encounter cards* in other player's threat areas, and Dendromorphosis, having a player cardtype (asset), is not an encounter card. The relevant rules are in the FAQ under (1.2) Triggered Abilities and (1.12) Weaknesses with Encounter Cardtypes. — Spritz · 56 9/25/20
This is definitely a rough weakness (though the impact varies quite a bit, Mystics bit using hands being the obvious example), but it's definitely not a boring weakness. Also, guardians can at least make their weapons Well Maintained to protect them somewhat) — Zinjanthropus · 96 9/26/20
This isn't bad for a lot of survivors. Some don't use hands too much anyway, and those that do have cards like Resourceful, Scrounge for Supplies or inherent abilities to just pick up what they had to drop off, sometimes with full ammo again. — Krysmopompas · 57 9/29/20