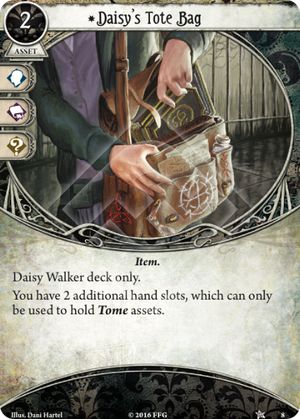 The most recent review for this card is over 3 years old. In that time, a bunch of new Tomes have been released, and other "Tomes matter" cards. Let's update this review: Is Daisy's Tote Bag a better card now that is worth spending an action and 2 resources? Or are players still just using it as a skill card?

VanyelAshke · 155
The advanced version is 100% worth playing. The extra hand slots get a lot easier to fill up if you can play tomes fast — NarkasisBroon · 1 1/3/21
Several of the newer tomes either allow fast actions or reactions, or may just be static - examples such as Dream Diary (reaction) or Occult Lexicon (must stay in play). 3 years ago basically every tome needed an action, so Daisy was never going to use more than 1-2 per turn, now she's likely to have 2-3 that don't require actions along with 1-2 that do. Also the addition of the Knowledge is Power event creates even more flexibility for having multiple tomes available. — Time4Tiddy · 165 1/3/21
If you decide to run parallel front Daisy, you also have a lot more reasons to run as many tomes as possible rather than just one good one. — Thatwasademo · 39 1/3/21
You can run parallel Tote Bag, as long as you also run parallel Necronomicon (John Dee) weakness, right? And you can use original (non-parallel) Daisy still? — VanyelAshke · 155 1/4/21
Yes, advanced signature assets / advanced weaknesses can be taken separately from the parallel investigators, so long as you either take both during initial deckbuilding or complete the associated challenge scenario. — Thatwasademo · 39 1/4/21
3

Having played Daisy quite a bit now, I can say that I don't care much for this card. Usually as Daisy, you only need one useful tome out (Typically Old Book of Lore or Encyclopedia). Once you have the book, your other hand slot should generally stay free in anticipation of drawing The Necronomicon.

The action and resources spent playing this out do nothing to directly help the investigators win, and often won't do anything even as the game drags on when either you don't need or can't play the other books, such as Medical Texts or even Book of Shadows, both of which are situational to begin with.

If your build really relies on having this many tomes out at once, then you'll be stuck waiting for this card to appear. Unlike your Tomes, this can't be tutored for by Research Librarian.

My take: if you play Daisy, assume you have only one hand slot. This isn't a big deal as your best killing tools, such as the acidic Strange Solution or "I've got a plan!", or even evasion tools such as Archaic Glyphs don't require a hand slot. You don't really need Magnifying Glass or Flashlight, nice as they are, when you can use Old Book of Lore to draw stat boosters or Encyclopedia to get a flat +2 for the entire turn.

Daisy's Tote Bag is best saved to commit to a skill test. Seekers simply don't have the time to durdle around with a potentially-meaningful hand slot increase when you can just deckbuild around it from the start.

Low_Chance · 6
Agree. This is one to keep an eye out in the future, though, because we may eventually get a tome that is really incredible but takes up two hand slots. Then the tote bag will start looking much better. — CaiusDrewart · 2501 4/29/18
Dude, you say keep a hand slot free for Necronomicon. Isn't that EXACTLY what you need this card for? Why should I choose which Tome I should have when I can have 2 or maybe 3 of them??? I personally love this item. The only disadvantage is, as you said, if you build ur deck around it, u have to wait until u draw it, but hey what do we have the Old Book of Lore for??? — matt88 · 2320 5/6/18
-matt88: The problem is that there's a really big difference between having 0 useful tomes and having 1, but there's barely any difference between having 1 useful tome and having 2. You only get one free Tome action a turn, and you need your other actions to hunt down clues. Having more books just means having more options, which is usually not worth spending a card, an action, and 2 resources, when you could be using that same effort to get clues and win the game. — Low_Chance · 6 5/8/18
Low_Chance: Clues just by themselves do not win you the game. Having more than one Tome is extra useful for your team. An strong enemy with high combat value spawned. I can boost my comrade's state to help him defeat that enemy. Me, or my comrade need cards. Done. And I can also have non-Tome items equipped, like Magnifying Glasses. — matt88 · 2320 5/10/18