Spend 1 supply, exhaust Thermos: Heal 1 damage from an investigator at your location (2 damage instead if he or she has 2 or more physical trauma).

Spend 1 supply, exhaust Thermos: Heal 1 horror from an investigator at your location (2 horror instead if he or she has 2 or more mental trauma). 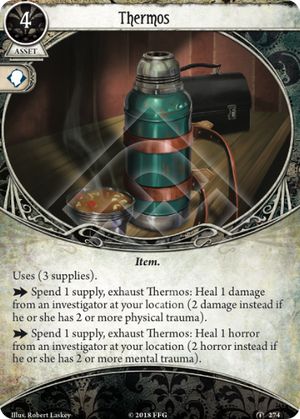 This is a really cool idea, especially if campaigns going forward emphasize trauma like The Forgotten Age has.

I would have MUCH rather had this be a 2xp card that came in at a cool 2 resources. Even with a more manageable resource cost, this card is still costly in terms of tempo and deck slots.

Maybe if we see more self-traumatizing cards like Arcane Research this could find a home. I'm pretty sure mystics won't take this because they have Fearless and Clarity of Mind, though, so it would need to be a different class.

PureFlight · 598
Why wouldn't a Mystic take this?? If you have 2x Arcane Research this card can heal a total of 6 horror!! Which other card in the game can do that?? — matt88 · 1909 10/30/18
It also costs 4 resources and 4 actions to get all that healing, and those are substantial costs. Besides, mystics have high max sanity and high will to mostly protect them from taking that horror. Two copies of Fearless (particularly the upgraded ones, which you'll be able to easily afford because of Arcane Research) is most likely all the horror healing a mystic not named Agnes needs. — TheNameWasTaken · 3 10/30/18
This card is very good for Agnes though. She can trigger forbidden knowledge to pay for thermos anyways (while killing monsters). — liwl0115 · 14 12/19/19
@matt88: I'm pretty sure that Liquid Courage can do that, though most Mystics can't take that. — Zinjanthropus · 96 6/22/20
2

While this card is too inefficient to consider in most circumstances, it shines when you are trying to nurse a traumatized investigator through multiple campaigns. I currently use this card to manage a Mark Harrigan deck with four mental and physical trauma. In a three-player game, you can usually spend a turn healing after this card hits the table. When used as part of a broader horror/damage mitigation strategy (i.e. Elder Sign Amulet, True Grit, etc.) it can be quite effective for scarred investigators hoping to save the world one last time.

Harigan9485 · 3
Also nice for Carolyn fern if Calvin is around. — Django · 2866 6/23/20
It's a cool idea to make a trauma campaign with investigators like Mark, a mystic with arcane research, and Calvin. Definitely take See You In Hell and other cards that toy with the trauma/defeated mechanic. As others have stated though, the extreme cost of the card, and huge tempo hit can take away from the fun. In general, I think the main issue Arkham Horror has with healing is not so much the cost, but Doom. If there's Ancient Evils in the deck (which is common), then spending all those actions and resources to heal feels wasteful. — LaRoix · 179 6/23/20
1

I think that this is too expensive for anyone but Calvin Wright to consider. I can see him needing to get himself out of a hole every once in a while. An investigator doesn't want to spend 4 for an asset that can heal once per turn. Even if it is somewhat a bit more flexible than First Aid. Only the second version of First Aid makes someone's list the majority of the time.

When Calvin Wright starts getting to that tipping point, he can lower his stats in a pinch to get to a safer ground. But, I still don't see it as that appealing.

Bronze · 118
I agree. This card is a cute idea but way, way too expensive. It's just hard to dump this many actions and resources into an effect this weak and still have a good shot and winning the scenario. — CaiusDrewart · 1886 10/13/18
A healing magic chicken-soup card will be included in decks largely because it is healing magic chicken-soup. — Cluny · 42 10/16/18
@cluny That’s redundant. Chicken soup is magically healing by default. — Death by Chocolate · 486 10/17/18
I gave this to Ursula going into Depths of Yoth with four trauma. It was in my opening hand along with Emergency Cache, and I was starting with two resources. It felt great to get that healing on the first turn....but the tempo of a who turn lost certainly ended the campaign for me. — CSerpent · 78 12/4/18
(eta: four PHYSICAL trauma. I was ignoring the two mental she also had) — CSerpent · 78 12/4/18
1

I think that the 4 resource cost is going to be prohibitive for most investigators. For 4 resources, you can play an asset that will help you actively advance the scenario such as Dr. Milan Christopher or Beat Cop. In my opinion, this card doesn't really deliver a powerful enough benefit to justify that cost.

Still, Carolyn Fern might want it for its flexibility and its potency. Any Mystics who are running 2 Arcane Research assets can benefit from its stronger horror healing ability early on, and Agnes Baker in particular would appreciate that. If the campaign has gone poorly, I can see some Rogue characters using their Adaptable talents to switch this card in towards the end of the game.

I think you'd only ever use it for the heal on traumatized investigators - if you use it for the one-off healing, it's mostly less effective than First Aid, and that's saying something, since First Aid is largely regarded to be an inefficient card.

ArkhamInvestigator · 227
I think the combo with Arcane Research is a thing. It may be expensive but some investigators could afford the price (I can see this on Agnes with double Forbidden Knowledge and Take Heart). — matt88 · 1909 10/13/18
This is released, and it is 0 XP — bits-in-a-ghoul-tummy · 30 10/13/18
I've been idly speculating at an Ashcan Pete deck that starts with 2 Arcane Research just to turn on desperate skills without having to drop Huberts. In such a deck the Thermos might find a place given he can ready it using his ability. Probably junk but its an option. — The_Wall · 180 10/16/18
1

I've found this card pretty useful with Norman Withers as I'm running double arcane research. I knew I'd meet the 2x mental trauma threshold form the start and i quickly upgraded into two copies of Shriveling(5) which has a decent chance of popping me for 2 horror. Thermos will undo that with one action. Lastly when thermos shows up on top of my deck I can get it out for 1 fewer resources which helps mitigate the high cost.

Tacomental · 10
I’m a little confused why you would run double Arcane research on Norman. They permanently fill up two of his 5 valuable level 0 mystic slots and once he’s upgraded a spell, it costs an xp to get a new level 0 spell to upgrade later. Especially since shriveling and ward of protection are the only level 1+ spell that benefits from Arcane Research (and I don’t think most people upgrade lvl2 ward into lvl 5). For all other spells, the double Arcane research only saves 1xp each on him since you pay 1 to swap in the level 0 and then X-2 to upgrade it. You could just buy the higher level spell for X and still have all five level 0 slots to use for good cards. I’m not saying it’s unplayable in Norman, but I’m trying to wrap my head around how valuable it can really be. Especially since if you are ‘quickly’ upgrading to two Shriveling 5s, it sounds like you aren’t getting full value from the Arcane researches (which would take four scenarios to get full value as you upgrade them. — Death by Chocolate · 486 12/24/18
Okay. I guess there is also mind wipe, so with two Mind Wipes, two Shrivileng, two Ward of Protection, that covers 6 of the 7 upgrade opportunities in a normal campaign to get full value from the Arcane Researches, but I’m still skeptical about committing 2/5 level 0 mystic slots for it. — Death by Chocolate · 486 12/24/18
I'm trying Thermos out in a Jim Culver deck with a pair of Arcane Research. The jury's still out, as it hasn't come in handy yet. — cb42 · 25 12/24/18