After Backpack enters play: Search the top 6 cards of your deck for up to 3 non-weakness Item or Supply cards, and attach them facedown to Backpack. Shuffle your deck. 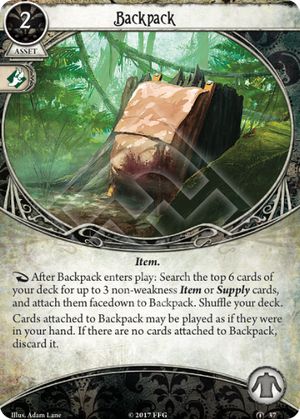 After trying this card a bit i'm actually very impressed.

This is a hybrid sort of card, it's a Tutor that actually searches for cards in bulk. That makes Backpack a weird sort of cross between Preposterous Sketches and Prepared for the Worst. So, what exactly does it do?

First off, this is a tutor effect. If you have powerful items or supply cards like Lightning Gun, Key of Ys, Strange Solution or The Gold Pocket Watch then this thing greatly hastens the rate at which you get them in play. This effect can be absolutely worth it even if you have only a moderate number of targets in your deck overall.

Second, this is a "bulk" tutor, it doesn't just hit some small and limited pool of key cards, it hits a variety of helpful cards like Emergency Cache, Knife and Flashlight, this has the double effect of A: drawing cards and thus shrinking your deck. B: Getting chaff and gunk out of your deck, thus shrinking it. The latter effect is actually better than it sounds, often you're looking to draw an important event or asset (Rite of Seeking for example or "I've got a plan!") and getting all your Flashlights and Emergency Caches out of the way can be invaluable, especially since these cards don't occupy hand space and thus don't mess with you when you're drawing aggressively.

Third, if you're looking for particular cards (as is usually the case when you slot tutors), even if you don't hit all three cards it is still probably a decent play. If you hit just one card, if that card is something like Lightning Gun, then it was still probably a fine play. If you don't draw the thing you're looking for, or nothing at all! then it was still probably a good play because at least the deck is shuffled, thus your chance of drawing the thing you need quickly is refreshed. In other words: Either you get what you wanted or you get a "re-roll" on the odds of drawing it soon.

So, how many items/supplies do you need to warrant backpack?

I've tried some item heavy dudes like William Yorick and folks with just normal item amounts. Generally I lend higher priority to backpack when there's upgraded targets in the mix. As a rule I found that hitting just 2 targets is perfectly acceptable.

12-14 viable targets I think is the maximum in a viable deck, it'd be something like William Yorick with Cherished Keepsake and Leather Coat in his deck.

10-11 viable targets is the upper average for most decks, generally that assumes 4-6 hand items, Emergency Cache an accessory and/or some unique item like Decorated Skull or Investigator strengths.

8-9 viable targets is the absolute minimum and I'dd only recommend it if there's cards in there like Key of Ys, Strange Solution or The Gold Pocket Watch that are really powerful and can't be tutored with Prepared for the Worst for some reason.

Tsuruki23 · 1264
I think this is great for most Guardian decks since it can find your expensive weapons AND Emergency cache to play them. It can also find Extra Ammunition and Contraband for those fun Shotgun Leo decks. — SGPrometheus · 265 6/12/18
Just be aware of the slot conflict with backpack and bandolier in guardian decks. — Django · 2866 6/12/18
Does anyone know if it's possible to play Moonstone from backpack? The card text only forbids you from playing or committing it from your hand, but backpack states that you're playing it as if it were in your hand. The FAQ text on "as if" effects doesn't really clarify this, for me. — Zinjanthropus · 96 4/21/20
@Zinjanthropus The text on backpack states "may be played as if they were in your hand", so I think Moonstone would still not be playable. — snacc · 356 7/15/20
Sorry I just noticed you said in your comment about the "as if" rule. I've looked it up here: https://arkhamdb.com/rules#As_If - I think the "as if" rule here means you are following all rules for playing a card "from your hand". This rule is definitely not the simplest one imo! — snacc · 356 7/15/20
3

So... this card reminds me very much of Preposterous Sketches, a card that is honestly pretty mediocre. The simple reality is that paying 2 resources and an action to draw three cards isn't economically viable in a game that is essentially about action management.

However, this card has two major upsides over Sketches. The first one is that it cannot find weaknesses. This is actually a bigger deal than it seems at first glance since weaknesses are a major reason not to aggressively draw cards.

The second reason is the selection. You don't play backpack in any deck, you play it in a deck that has multiple Item or Supply cards that you really need. Here is a list of all Item and Supply cards.

While it could hit Emergency Cache (and is probably nice if it does hit at least one), you are really looking for decks that run a large number of qualifying cards. Mathematically, you want half your deck to be Item/Supply cards (probably more so you don't miss). Because that's the problem with this card: if you don't get three cards under it, it's really quite mediocre.

That being said, if you ever get Lightning Gun, Extra Ammunition and Emergency Cache on this thing... that's pretty good.

However, because it also takes up a body slot (not the most contested, but not trivial either), I don't see this card getting a ton of play. So, better than Sketches in a few decks, but probably still not the Diesel we need.

wern212 · 95
You mention Preposterous Sketches mediocrity. The point of Sketches really is to take 1 action to draw three cards and hopefully get you back up to higher education territory. It is a small price to pay to ensure success moving forward. — Myriad · 732 6/12/18
2

Django · 2866
About the last listed disadvantage: if my plan for my deck is to find a crucial item early (weapon, valuable trinket) then Backpack is highly valuable (like at least No Stone Unturned avaiable for everyone). For example Zoey: she can find LGs, Machettes, Survival Knives, Extra ammos, Emergency Caches, ZOEY'S CROSS... Finding one of these is nice and justifies including this item to deck, finding two makes it extremely valuable. And if you find three? Some statistics: getting 5 weapons and two copies of any card mentioned by me means 10 targets for Backpack. Playing it as a first action gives 95% chance to hit one card (73% for only weapon), 72% to hit two cards and 36% to hit three cards. — KptMarchewa · 1 6/7/18
Thanks, i wan't thinking of specific items. Update: Added Kpt@Marchewa's point; Neutral tutor; it can "find" itself — Django · 2866 6/7/18
Self-tutoring? Backpackception. — The_Wall · 180 6/9/18
So we have confirmation this works with cards like Ever Vigilant and Sleight of Hand? I ask because if you can Sleight items out of it, it makes the backpack a lot better. — Myriad · 732 6/12/18
@myriad This works with Ever Vigilant, because Ever Vigilant allows you to play assets from your hand, but not Sleight of Hand, because that puts assets from your hand into play. Since Backpack specifically says you can play the attached cards as if they were in your hand, you can't do other things with those cards like put them in play through another effect or commit them to tests. — SGPrometheus · 265 6/14/18
But you CAN Sleight of Hand your Backpack into play, find some items, and play those before taking the Backpack back into your hand , with the understanding that any of the Items that don't get played will be discarded. — CSerpent · 78 3/13/19
2

This is a very very interesting card. It's utility isn't very apparent on first glance. In terms of straight value, Backpack is only ok. It costs an action, a card, and 2 resources in order to draw 3 cards. So basically you've spent an action and two resources to get 2 additional cards. That's not great value.

Where backpack becomes much better is if those cards that you draw synergize with each other. For example, if you're using a Jim deck with Grotesque Statue, Ritual Candles and Chthonian Stone, Backpack will increase the chances that you can have all three cards out at the same time. That is very valuable.