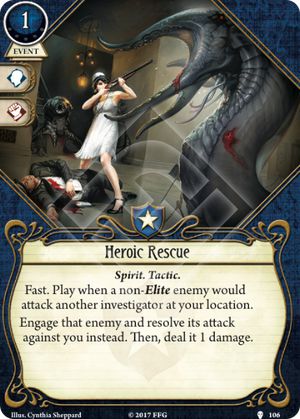 This card works great when it’s played in response to an attack of opportunity especially when you’re running it in a Zoey Samaras deck that has Guard Dog and Zoey's Cross in play. That’s three automatic damage not to mention the free engagement allowing the other investigator to act unmolested. Finally, the strength and willpower icons are always useful for all your combat and treachery skill tests. Great card!

FractalMind · 32
You nailed it. This card is great in my Yorick soak deck playing along side Daisy. Daisy also has Archaic Glyphs: Prophecy Foretold. Basically Daisy is free to sniff up clues 24/7. Enemies engaging her are rarely an interference. — crymoricus · 209 1/10/19
4

Pretty weak card, still useful for a very specific purpose. And it's actually pretty flexible for that purpose!

When you play a dedicated combat guardian, like a Mark Harrigan or William Yorick, you stick close to your clue specialists, you stick around picking up easy clues or beating down trouble that you or they find. This card helps you serve this role of tight-formation protector.

The trick to this card is that it works against voluntarily suffered attacks as well as enemy-round ones, this means, for example, that if you stick within one location of your buddy, if they draw an enemy, they can spend one action to move to your location, you intercept the attack of opportunity, and they carry on hoovering clues. If you're at the same location as an ally who's just drawn an enemy from the encounter deck that ally can just carry on as if nothing happened and keep digging for clues, you will intercept the attack anyway!

In other words, you need to not think of this card as a way for you to engage enemies and deal them damage, obviously this card does that job terribly! You need to think of this as a Fast auto-evade for your friends, who while you have this card in hand are able to do their jobs uninterrupted.

William Yorick likes this card because he has a test-less card package that can deal respectable damage without risking the luck of the bag. This involves the use of cards like Guard Dog, Lantern, Mano a Mano and/or Beat Cop.

Mark Harrigan specializes in killing threats and mitigating damage, it's easier to heal oneself than others and this card lets your friends drop off a target to spend all that Ammo on along with a bit of damage to heal.

I can't see other characters having the sheer staying power to support this card, Zoey Samaras can bear with it since she's one of the toughest characters in the game thanks to her resistance to horror via her great but she may find it hard to find space for this card in-between her tech cards.

Tsuruki23 · 2037
Great review, only issue with the first example is that attacks of opportunities occur after costs are paid but before application of the action. When your friend moves to your space, the attack occurs in the first space. Once they've soaked it and moved to you, you can intercept the next AoO when they start hoovering. — Death by Chocolate · 835 4/26/18
The cards "Let me handle this!" and "On the hunt" serve a similar purpose but don't require you to take damage, so i prefer them over this one. — Django · 3616 4/27/18
@Django: pretty much. If Guardians were better at soaking up the horror monsters deal, cards like this (and Guard Dog) that encourage them to take attacks might be more appealing. As is, not so much. — CaiusDrewart · 2439 4/29/18
Side note, carolyn has a lot of sanity and access to guardian damage healing/soaks so it might be more useful for her to kill 1 HP targets and gain ressources when healing her own horror. — Django · 3616 4/30/18
this card has some synergy with 'survival knife' allowing you to deal 3 damage to an enemy out of your turn (during the enemy phase or another player's turn). — 11zxcvb11 · 3 6/12/18
@11zxcvb11 Nope, Survival Knife can only counter attack during the enemy phase. — Death by Chocolate · 835 9/16/20
3

Good card for Nathaniel Cho. This card will be played during the Enemy Phase, so he can deal 2 damage instead of 1 even if he used his ability during the investigator phase. You possibly save someone in trouble, soak the attack (or Dodge it), then deal 2 damage to the enemy to kill it or soften it. Can be followed by a Counterpunch. This card has the Spirit keyword so can be fetched with the Boxing Gloves.