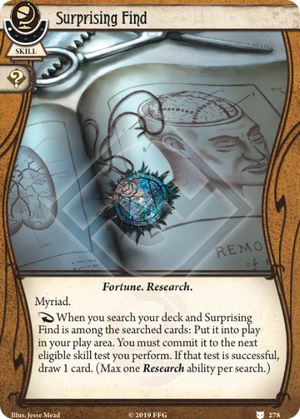 This thing directly competes with Astounding Revelation and +1's are easier to come by than chunky resource boosts and bonus secrets.

What Surprising Find does is thin your deck to a rather insane level, it's what you do to mitigate the decision to build a 50 card Mandy Thompson deck or if a lengthy campaign has stuffed your deck that was already using Astounding Revelation with half a dozen extra weaknesses and story cards.

The fact that you dont draw an extra card unless you hit it with a search effect is a real problem for this thing. It'd actually be somewhat playable if the Draw were'nt locked into the search.

So, outside of 50-card Mandy, stay away.

It's fine! Obviously, this is great for Mandy. And I dare say for a 40 card deck which I think is the best number for her.

I found that later in the scenario, I got no Research abilities, these replenish them, and basically with Easy Marks - 40 cards becomes 30, and aIso faster.

Don't judge it too harshly, so cards are made for certain characters. These are the ones for Miss Thompson.

I want to emphasize, what I have already mentioned in a comment to another review: this is a great card for parallel Skids! First and foremost, because he can take this as a Fortune, but not Astounding Revelation. Also, he has no access to Ancestral Knowledge, which might very well be another nail in the coffin for most other investigators interested in this card. If any of the cards get randomly attached to the permanent, they lose their purpose.

This card was insane for Skids before the current taboo, which removes Three Aces from the game after used. I think, I assembled them 4 or 5 times in a single scenario of The City of Archives, with the help of Practice Makes Perfect and a certain location of that scenario. But even if you now don't go PMP with Skids (which you probably still should), he has great search potential with Lucky Cigarette Case (3) alone, and Surprising Find will make cycle through his slim deck so much faster.