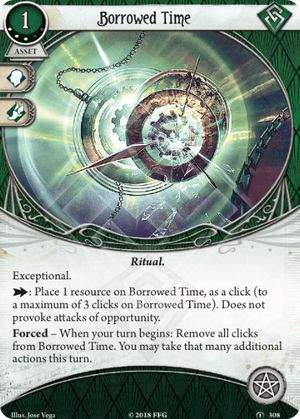 Took this card in a campaign and it's great fun. I would venture to say it's a little underrated.

Aside from the obvious synergies with Pay Day, The Red-Gloved Man etc., this card provides a few subtler benefits, for example...

iceysnowman · 158
Well, Borrowed Time is an asset, so you cant play it if you get Dissonnant Voices, and you are Forced to trigger the efect as soon as your next turn begins, so in the 90% of the times, you spend an action to play it and you can save only two actions. I´m not saying it has its usses, but you need to build a specific deck just to trigger it. Quick thinking and Swift reflexes are a must in it, plus all the other cards you want to proc with it. — Fenrirgarm · 5 1/18/20
Sorry Fenrirgarm - are you reading the card as needing to be discarded when its effects trigger the next turn? Borrowed Time can't help if it's in your hand the turn you pull Dissonant Voices, true, but if it's in play already you can trigger the action on it without issue. I like the points raised in this review, I was interested in the card before - and now I'll be sure to buy it in my next campaign :) — Prinny_wizzard · 187 1/18/20
10

I think this card offers a more interesting opportunity than simply allowing you to defer one turn's worth of actions in their entirety, so your next turn can have six actions. You can certainly do that, but you can also build towards your six-action turn in a different way. This card can also be used to give you multiple (in theory) six action turns over the course of a scenario, or a few four (or five) action turns.

You may be forced to remove clicks off this card at the start of a turn, but if nothing during your turn is forcing you to lose actions, there's nothing stopping you from spending those bonus actions on clicks again, and continue deferring the action.

So if you have a turn with an action, but nothing optimal to use it on (the times when you're thinking of drawing a card, or gaining a resource anyway), you can use your action to put a single click on your Borrowed Time. Each turn after that you can decide if you want to use the fourth action, or put it back on the Borrowed Time. If you run into a second turn that's going to have another sub-optimal action, you can defer it to the future as well.

I don't think this card is going to have the same massive payoff that Ace in the Hole does, but I think the ability to consistently defer sub-optimal actions to a future turn when you may need a fourth (or fifth, or sixth) action is quite powerful. Is it worth 6xp? Not sure, but I'm looking forward to finding out!

cb42 · 33
That's a pretty clear explaination of the power of this card. Action management is a strong rogue tactic and I think Sefina and Finn can use it to do wonders! — mogwen · 250 11/26/18
I think this card would work well in a Chicago Typewriter-focused Skids. With Skids' ability and extra actions from Borrowed time Typewriter can be pumped up for some really strong shots. — matt88 · 2562 11/28/18
4

While people have written about the deferred action value, I haven't seen any conversation around specifically using this card to maximize your "extra action" events and skills.

I personally find that this card is most useful in allowing for Quick Thinking or .41 Derringer to be used when you know you will succeed, regardless of whether the extra action would be useful THAT TURN. So shoot .41 Derringer at a Swarm of Rats and then bank the extra action for a turn when it will be better used, like right after the Act advances or when you have the "right" cards in hand. Or ping Quick Thinking on Lockpicks during the first round and bank an action for fighting/evading after monsters have spawned. If you are using Double or Nothing, even better, as you can use it on a nearly guaranteed success on a 1 target and put two actions on Borrowed Time, also clearing DoN out of your hand. Heck, you could drop Ace in the Hole as soon as you get it and load it onto this card, if you're worried about discard effects. As others have mentioned, you can carry up to three actions forward indefinitely until a better turn.

I've often found that I have those rounds where I could get 6 actions but don't have Pay Day in my hand yet. No problem! Grab those actions now and defer them. Or start building an easy extra action here and there as the game progresses so that you'll have six for the boss showdown with your Chicago Typewriter.

Long story short, you don't need to spend your 3-per turn actions to build this card, instead you can use your "extra action" economy cards to guarantee the extra actions on the front end, and have them when you need them on the back end.

Time4Tiddy · 198
Makes it great for Tony, then! — MrGoldbee · 1250 11/23/20
I’ve only run this card with Preston, and I combined it with Haste as a way to “launder” actions - Preston would take 2 activate actions, then use Haste to generate a third Activate action using Borrowed Time which could be used for any type of action next turn. It worked ok, but took some setup and I didn’t think it was quite worth all the effort. — ArkhamInvestigator · 275 11/23/20
4

[Pre-release review written before the last three scenarios of The Forgotten Age were published.]

Okay, this is a weird one. Unlike Ace in the Hole which, for the same XP cost, is instantly and reliably useful, Borrowed Time can only really be useful if you build your entire deck around it.

While superficially similar to Ace, Borrowed Time gives you deferred actions rather than extra ones. Why would this be useful? Mainly because of the combos you can achieve with cards that confer bonuses until the end of the round, the phase, or the investigator's turn. That means building a deck with one-round-boost assets, or at least a large number of events and skills.

Ideally, the one-round boosts should come from reusable assets, because then you could reliably spend alternate turns saving up actions and then taking pumped-up super-turns. At the time of writing, the assets with one-round boosts (based on the search strings 'x:"end of the"' and 'x:"end of your"' on ArkhamDB) are:

So, basically, Lola Hayes with Encyclopedia is your only option at the moment, but it's a pretty compelling option. More on that in a moment.

Turning to single-use cards, first of all you should obviously try to run two copies of Pay Day with Borrowed Time. For 0XP cards, Intrepid, Sleight of Hand, and especially Fight or Flight should usually be included in a Borrowed Time deck where feasible. Mind over Matter won't play well with any of the characters so far who can actually buy Borrowed Time, but who knows what the future holds?

Having said all that, I think a Borrowed Time/Encyclopedia combo has some real potential for Lola or for a hypothetical future Rogue/Seeker character. The Seeker class has Research Librarian and No Stone Unturned to improve the chances that the Investigator can actually get Encyclopedia and Borrowed Time into play. Maybe supplement with Quick Thinking, upgraded .41 Derringer, or the normally-inefficient Leo De Luca in order to get even more boosted actions. In Lola's case, she also has access to all those lovely Survivor cards, so a Lola/Borrowed Time deck could be a serious powerhouse.

For anybody else, though, this seems like a pretty dubious thing to throw 6XP at.

sfarmstrong · 255
You forgot the most powerful 'until the end of your turn' card: Will to Survive — Littlepoo · 106 9/19/18
Oh, I must have deleted that reference when I was editing. Yeah, Will to Survive is obviously a great combo, although of course at the moment only Lola can run both. — sfarmstrong · 255 10/2/18
I think the Colt Vest Pocket from The Depths of Yoth was designed to go with this card. — Xenas · 6 10/20/18
One other thing to note, you don't always have to plan huge build around this. You spend 1 resource to put it into play, and then you can "bank" actions on it. On the next turn, you can just re-bank up to 3 actions on it again. — Faranim · 339 10/26/18
I agree with @Faranim here, you don’t need to build a gimmick deck around this card. Actions are not valued equally across turns. The most reliable case is a fight-Rogue who can use this to bank actions for when enemies show up for very bursty attack turns. On the flip side, sometimes investigaty investigators find themselves with a pile of monsters on their face, and they can take the attacks at the end of the round safely, but don’t want to waste their whole turn evading and the guardian can make it to clean up next turn, this lets them save an entire dead round. — Death by Chocolate · 1171 11/19/18