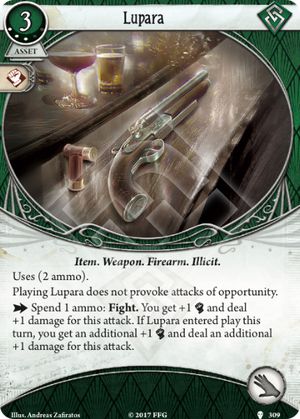 If you are a fighty rogue you should take this and sleight of hand.

Great for Jenny, fantastic for Skids (he has slight flexibility in actions) and probably not worth it for Sefina outside of some weird builds.

But this is a weapon that makes Guardian's green with envy. Drop it and unleash hell into a big enemy for maximum effect OR sleight it out and unload and pop it back for a repeat.

This is a perfect target for prepared for the worst! No longer is that card just a placeholder, but it can actually set up for some bigger damage later.

And it is only one handed?

Man, I think the only thing I don't like about this card is that it has two ammo. But even that isn't that big of a downside. You will probably want to ditch it after using it anyway.

Its good. Really good. And what a homerun for theme.

Spoilers for "The Circle Undone" campaign

Tony leaned against the Church door, breathing heavy. The wailing dead filled the air, pouring in and out of the fractured sky as reality itself buckled under the weight of the Silver Twilight Lodge's hubris.

"I am so tired," the bounty hunter whispered, feeling the culminated trauma of the last week's events spill over his body.

"Tony Morgan." Carl Sanford walked down the road, the unhallowed spirits parting from the old man's path. "I had such faith in you, lad. You could have been one of the greatest Knights in the Lodge's history. An exemplar in our moment of triumph! Instead, you are an ant..." he inhaled and reality flexed around him. "... where I have become a god."

Tony forced himself to his feet. "It was a pretty good plan, Carl. But you forgot one thing."

With the speed he had built his entire reputation around, Tony pulled Lupara from his coat. Sanford barely had time to register the weapon before she sang her violent song twice. The old man fell to the ground, screaming as he clutched at his bloody legs.

10/10 would kill endgame boss in one turn again.

Of course we're all thinking of Bob Jenkins using his additional action to play this during his turn, not taking an AoO, and getting that extra damage and boost. But if you're running Joey "The Rat" Vigil and Shrewd Dealings (and of course you are) , you can also play this for any investigator at your location, during their turn. The downside is that no one can sell the empty gun back to Joey, but this could save a character struggling with ammo, actions, or resources while engaged to an enemy.