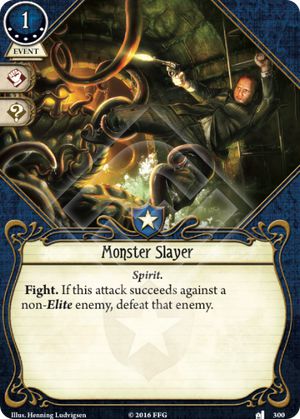 Including this card in your deck is like ripping off a band-aid.

At first you look at the 5xp cost, and the net effect, the requirements to pull it off, and careful consideration should bring you to the conclusion that Monster Slayer is a bad card to invest in for 5xp.

I tried Monster Slayer, gave it a chance rather then going straight for Lightning Gun, a card that has proven to be worth the cost. At the time I had already finished a Talent based build built around Well Prepared. And then I got the second copy one scenario later.

In the final scenario me and my teammate proceeded to draw two big monsters in the same mythos phase, and I, like Superman grabbing a couple of crooks and bonking their heads together, defeated them with just one action each.

So there I sat, the monster hunter with nothing to do anymore, in disbelief over how effective the "bad card" turned out to be.

So, yes. Including this card in your deck is like ripping off a band-aid. It looks iffy and you really don't wanna do it, then you finally do it in a burst of stress and determination, and then you relax with a sigh of relief because it was'nt nearly as bad as you thought it would be.

I'll just say this, when you have cards like Physical Training(2xp) and Well Prepared to boost your fight stats without weaponry, Monster Slayer becomes a far worthier addition and a relatively good fit into the cost-curve of such a deck.

At first glance Monster Slayer is utterly unremarkable and may in fact even be a bit bad. My first impressions of the card were utterly negative.

"You mean I have to pay one and make a fight test without weapons and I have to succeed in order for this to trigger?"

I have played the last scenario about a half dozen times and I feel that in the Dunwhich Legacy campaign, if purchased in the final act you will have some good targets to choose from and might be a worthy include if your group only has one monster hunter.

But this card is a fundamental "key stone" card to your deck. I would never advise someone in the midst of a campaign buy the card because its effect is utterly unremarkable compared to the weapons you can buy.

Always buy a Lightning Gun or the Shotgun first and always spend the 9-12 xp to get two copies and extra ammunition (its really worth it for consistency to get two, even with Prepared for the Worst).

Thus, only consider this card if you are closing in on the last two scenarios and you have a bulk of xp burning a hole in your pocket. It is pretty much this or I've Had Worse. If your group needs you to go all in on the monster slayer role (because you are the sole monster hunter in a group of 3 for instance) or you just really, really want to hit some of the nasties at the end and take them down, then by all means.

If Path to Carcosa has a lot of weird, tough monsters then it might be worth an include there as well. Time will tell.

Myriad · 1101
Setting aside the xp cost, which is not negligible, this says, "Succeed at a Combat test, pay 1 resource, and defeat a non-elite enemy." Depending on the damage the weapon you're using and the total Health of the enemy in question, this can save you quite a few actions. I don't tend to use high powered Guardian weapons so it is quite possible I am misunderstanding the action saving potential of Lightning Gun or Shotgun, but I can see situations where this card potentially makes any attack just as action conservative as those cards without bogging your deck down with extra ammo or weapon seeking cards. I think this is a fruitful area of inquiry for the mathematically minded. — miggydoh · 74 8/9/17
This card is pretty good--if you use it to kill a Conglomeration of Spheres or something, you're saving quite a lot of actions. The need to pass a combat test without a weapon bonus is irritating but Guardians can do it. But yeah, the 5 XP cost is excessive. At the very least you've got to pick up upgraded weapons and allies first. — CaiusDrewart · 2381 8/17/17
It is good in Undimensioned and Unseen, a tricky scenario for Guardians. — duke_loves_biscuits · 896 6/29/18
@duke_loves_biscuits You can’t use this card to kill monsters from U&U — EvoLwe · 1 1/7/19
@EvoLwe Actually you can if someone casts Mind Wipe, but you miss out on the Victory. — Death by Chocolate · 730 2/4/19
This should have been a skill — Calprinicus · 2692 2/23/20
1

This card was bizarre before Nathaniel Cho arrived, but now it’s an interesting gamble. Before, it required investigators who are super good at using their weapons to succeed against a dangerous monster... Without using weapons. That made it good for conglomeration of spheres and little else.

The reason it’s a gamble is because Nathaniel, more than most investigators, has a lot of 1-2 XP picks he wants two of. Mano a mano, Radiant smite, vicious blow, lesson learned, galvanize... And that’s without getting into assets. But these all help you kill monsters, they don’t kill monsters directly.

But the only way you’re getting your monster slayer five* back is with an elder sign on a fight check. Unless you do something very weird and add quantum flux with versatile.

But when you play this and invest in it, you have a 90+ percentage chance of getting the monster into the discard pile. No more “if I hit him two out of my four tries“. No retaliates. And you can even use it on enemies engaged with your allies for one damage on a miss, which you can’t deal with the Lightning gun.

so this card might be an interesting Late campaign pick, or a fun card to really gamble with.

(*Not like the cryptkeeper five, which is the band from the Monster Mash.)

MrGoldbee · 1042
While it is true that this card is good in Cho, the question is - is it 5 xp BETTER than Monster Slayer (0)? That card is already doing 3 damage typically for him which is already enough to kill most non-Elite enemies, and the upgrade actually loses value against Elite enemies. If you are going to pick up a 5xp fight action, I think you are much better served by One-Two Punch (5) which also typically gives an extra two damage for 5xp, but it also gives increased reliability and versatility (the two attacks no longer have to be the same enemy) over its lower level version. It also provides incredible burst against Elite enemies. — Death by Chocolate · 730 10/31/20
True! — MrGoldbee · 1042 10/31/20
Also an efficient way of getting rid of Tommy Malloy — Defel · 1 11/1/20
5xp aint efficient! — MrGoldbee · 1042 11/1/20