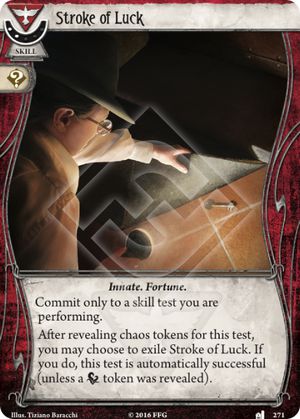 The exile mechanic is an interesting one. Cards with an exile mechanic are extremely expensive near the beginning of a campaign but seem reasonable near the end. If purchasing before the last scenario, any card you purchase has an "exile" effect.

Stroke of Luck came out with the 2nd to last Mythos Pack of this cycle. So what should be the XP value of this skill card? Most skill cards have an XP value of 1 with few exceptions. This card however, is much more powerful than any skill card. No skill card can do better than Stroke of Luck. It's the most powerful skill card in the game. You could have a base skill of 0 and still have a 95% chance of beating a skill check of 10 or more. And as such, it should have a higher cost than other skill cards. But how much more? Double? It's probably worth a bit more than double considering it's Wild and its also saving you from using multiple cards on one skill check. Three times? Depends on the scenario. Will there be those situations where you need a boost of +4 or more? In the last few scenarios it's much more likely.

randplaty · 34
Just to clarify how XP is measured: Cards with no XP pips are considered level 0. So, all skill cards released to date are either 0XP or 2XP. That said, Stroke of Luck does seem impressive as one of the few ways to almost automatically pass a skill test. As to whether its 2XP cost is too low, compare it to Will to Survive [3XP, 4 resources]. A single Will to Survive can provide 3 truly automatic successes on one turn at the cost of only 3XP, and do so every game. A single Stroke of Luck would cost 6XP for 3 almost automatic successes (it's still subject to the Autofail token), and could only be used once per game. Given that, I'd say its 2XP cost is about right. — Herumen · 1597 6/11/17
Stroke of luck does not work exactly like Will to survive though. Indeed, where the former allows for automatic success (making all test difficulty a 0, bare an autofail), the later only allows you not to draw token - meaning that you still need to match the test's difficulty! To take an example, if Wendy Adams wants to attack Umôrdhoth, she'd better be using Stroke of Luck rather than Will to Survive. — Alleria · 103 5/22/19
I assume that the other aspects of the chaos token area still resolved, ie. the cultist symbol demands you discard 3 cards or something. Correct? — shenaniganz11 · 9 10/29/20