While Avian Thrall is being attacked using a Ranged, Firearm, or Spell asset, it gets -3 fight. 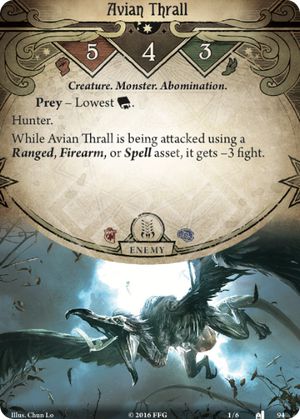 In my last playthrough of Dunwich, I blew this guy to smithereens with my trusty Shotgun only to suddenly have a moment in the shower where I went, "wait a minute... was I suppose to buff the Avian Thrall?"

The question remains: what is the "it" referring to on the card? At first glance, I thought it meant the Avian Thrall, meaning it gets -3 fight whenever you hit him with pretty much anything but melee. However, if the "it" refers to the traits, then your attack would get -3 fight, making him effectively 8. So which is it?

I think it makes more sense to debuff the enemy given the traits (kinda hard to Machete a flying pterodactyl if you know what I'm saying. But grim rule exists so I am left to wonder.

I figure if they wanted the debuff to apply to the players, then they probably would have worded it as so: "Attacks made with assets that have the Ranged, Firearm, or Spell traits get -3 fight against Avian Thrall."

LaRoix · 1574
"It" refers to the enemy's fight value. So if you shot it with a shotgun, the Avian Thrall would only have a fight value of 2. Note that assets and investigators do not have any fight values. Some assets modify investigator's *combat* skill value or other skill values like willpower during a fight skill test. But "fight value" refers specifically to the value on the enemy. — iceysnowman · 156 6/19/20
Oh I see, that makes sense. Thank you! The debuff is a cool mechanic nonetheless, enemies with weaknesses to specific traits really. I hope to see more of this type of thing in the future (mind you I have not played every expansion yet as of the posting of this comment). — LaRoix · 1574 6/20/20