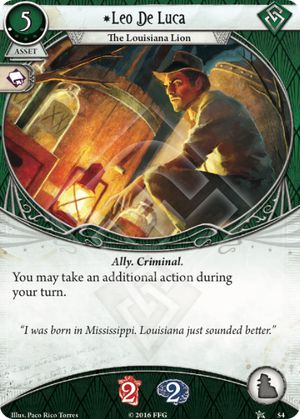 This is one of the least impactful upgrades in the game, but still deserves a review. Although I often get Leo De Luca, I rarely get this upgrade. The general “rate of exchange” in this game is that 1 XP makes a card one cheaper, and this card follows that rule. However, I tend not to like it for two reasons:

However, I should mention a couple reasons why you would play this card:

I think that if either of these two advantages are appealing to you, you would be even better off buying Another Day, Another Dollar instead - assuming your character is permitted to take that card.

ChristopherA · 97
More fun with Chance Encounter tho. — MrGoldbee · 1311 4/17/21
I like the upgrade stacked with Leo Anderson's discount ability for allies - 4 resources means you still have 1 resource spare if De Luca (1) is in your starting hand. Not huge, but it feels a lot better than going down to 0. — Prinny_wizzard · 207 4/18/21
"I want to add Leo to my deck after level 1, o he comes with a discount, nice!" Seen here, a world where adaptable doesn't exist, or you know, you just bought charisma and whats 2 more XP? — Zerogrim · 262 4/18/21
I feel like you've overlooked the key value in this upgrade. It is not about saving you a resource. It's about saving you an action because if you draw him turn 1, you can play him with your 5 resources. And if you don't, it is far easier to hover around the 5 resource mark than it is 6. — LaRoix · 1608 4/18/21
Yeah, the point of it going down to 5 is you’re able to play it straight away without taking a resource action. You can of course splurge more and get Another Day Another Dollar for a similar effect. — StyxTBeuford · 12744 4/20/21
It does typically save an action rather than merely a resource, but that's still weak for 1 XP. — CaiusDrewart · 2815 4/20/21
If you want the effect reliably, you need to upgrade both copies for 2 XP to save 1 resource. Because you likely never play both copies of Leo in one game. So for 1 XP more, you can save 2 resources with ADAD on your round 1 Leo play. I would say, unless for off-class rogue, who are restricted to up to level 2, this is a better deal. — Susumu · 271 4/20/21
To rebut the 2xp crowd: you could always upgrade only one of them. That's the one you're more likely to actually play, since sometimes you draw them both and you would obviously play the cheaper one. — MrWeasely · 35 7/6/22