Set the base value of your and to 2.

Set the base value of your and to 5.

Exhaust Monstrous Transformation: Fight. You deal +1 damage for this attack. 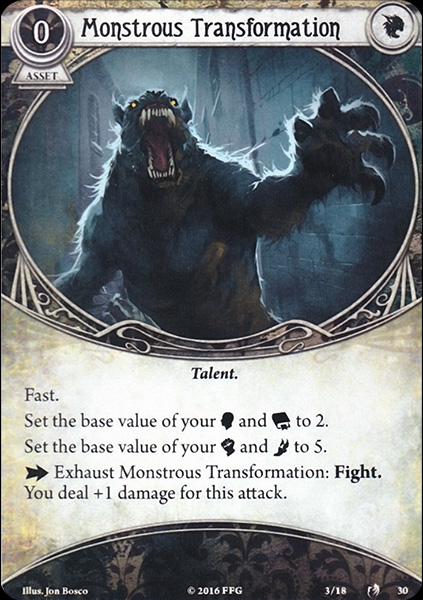 If only there was a multiclass character who could benefit from both? Enter Diana Stanley, Werewolf! The "drop" to 2 Will is actually a permanent boost for her and the increased physical stats really help with her Guardian subclass!

So she's got almost no intelligence this way. Well she did join the cult in the first place...

Carolyn Fern absolutely loves this card and it’s paired supposed “weakness.” She can clue with her base stats and then hulk out midway through a scenario to take on the inevitable enemies. Meanwhile, your likely horror-healing deck thrives off the dependable horror from the paired weakness, feeding your Keen Eye stat boosts with the generated resources.

Also, unless I screwed up the scenario rules, it lets you absolutely CRUSH one of the scenarios in FA.

cstraw · 4
This is even better if calvin teams up with carolyn and he has this and the weakness. Use solemn vow to move horror to carolyn (or her peter sylvester). — Django · 4207 5/14/20
It's also really good with Preston. It would be especially good if you can manage to get permanently Yithian'd. He would definitely appreciate Horror Healing Support, though. — Zinjanthropus · 208 5/17/20
0

"Ashcan" Pete enjoys having this card immensely. It doesn't reduce his intellect at all, and his willpower stat is purely defensive so he doesn't much mind that getting nerfed, either. Meanwhile, the boost to combat allows him to save Duke actions purely for investigating while Ashcan wields either a weapon or makes use of cards like Brute Force and One-Two Punch to murder enemies with his bare (or bear) hands

ClownShoes · 59
A wolf and his dog. — MrGoldbee · 1250 3/16/21
I don't think this works with Duke... from reading the faq on The Skeleton Key, it implies that 'set' takes precedence over all other changes, so Duke couldn't change the base values anymore. — Hylianpuffball · 20 3/16/21
And if it does work, then... meh? Lose two willpower to gain one fist and two agility? It doesn't seem like this works any better for Pete than for any clue-secondary investigator. — Hylianpuffball · 20 3/16/21
About the only advantage Pete would have is his ability to take Peter Syvester, I suppose. Though the BMOC is hardly the best ally for him either. — suika · 8634 3/16/21
@Hylianpuffball: Ah, but Duke isn't a static "set to X" effect like Skeleton Key. When you use Duke to investigate, you are taking an action that temporarily overwrites Pete's base intellect for the duration of the skill test. Therefore, Monstrous Transformation wouldn't adversely affect it. Also, you're misunderstanding my point about the combat boost. When Ashcan goes into beast mode, he no longer has to rely on Duke to fight, freeing Duke up to sniff out clues while Ashcan punches stuff. A challenge with Ashcan/Duke has often been finding a way to make full use of all three actions, since Duke normally can only be used twice per turn. When Ashcan transforms, he can fight-investigate-investigate in a single turn, which seems pretty good to me! — ClownShoes · 59 3/16/21
Duke isn't a "Set" effect, but Monstrous Transformation is. — Hylianpuffball · 20 3/17/21
The rest of the FAQ on Skeleton Key does talk about setting "base" values, but allows it to be modified afterward. You can certainly play this to get a base intellect of 2, then investigate with a skill value of 4 with Duke. — toastsushi · 62 3/17/21
Duke isn't a modification of your base skill value. Your base skill value remains set at 2 when you Investigate with Duke's ability, but you use a different base skill value for the test, not your own base skill value. — suika · 8634 3/17/21
Ah, suika, you're right. Duke doesn't modify _your_ base value, but modifies the base value you use for the test. Kinda like the effects that day "You may use X for this test instead of Y", only in this case X is just always 4. — Hylianpuffball · 20 3/17/21
0

Is this card available via deck creation or upgrade? What means base value? Will Maginyfying glasses and Dr. Milan Chritophers +1 book still be added or are they worthless with Monstrous Transformation? I think this would be super cool with Amanda.

Unterberg84 · 1
It is available only, if you play Rougarou and get a certain resolution as lead investigator. Note, that in that case, you also have to take the "Curse of the Rougarou" weakness into your deck. For the second question: yes they will add. Your base value is just, what is printed on your Investigator card. (Or in cases like this a replacement of it.) — Susumu · 217 2/15/22
Ah ok, Thanks for the clarification! — Unterberg84 · 1 2/15/22
Super cool? More like super boring and game breaking — Nenananas · 220 2/15/22
I'm not sure, if it's super broken in her. I guess, Acidic Ichor is her best way to fight, and that sets the base skill to 6, so the Transformation won't help with it. Therefore, she trades +3 to evade and the occasionally option to punch rats for a pretty rought weakness, she will see early in the game every game, thanks to her seeker card draw. I agree, it's broken on Calvin or Preston, but for her? — Susumu · 217 2/15/22