While you have 5 or more cards in your hand, Higher Education gains:

Spend 1 resource: You get +1 for this skill test." 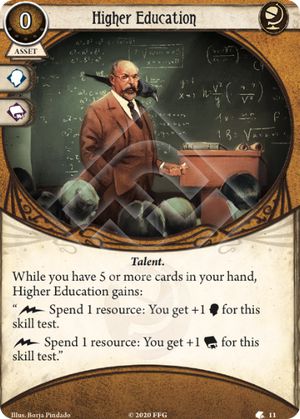 It's temping to turn this review into a referendum on the "Blood on the Alter" 3 XP Permanent boosters, but let''s not.

Assuming you want to play with the "pay to pass strategy, most 0-cost "play from your deck boosters" are 2 XP, so this is a bargain. The "you must keep 5 cards in hand" drawback is moderately steep. So, to make this more than a "sometimes treat," you need to have good card draw (to find it and keep it active), good Resource economy (to pay for frequent use), and and that need boosting. Seekers tend to struggle a bit with resources while they get their rigs out, then slowly amass quite a pile toward the end, so having a way to turn that surplus into winning is not a bad thing, even if "pay to pass" is not your main strategy. Which Seekers might like it?

Note: I am assuming Taboo, so spamming Dr. Milan Christopher isn't an option.

Amanda Sharpe -- Her dreadful stat line could definitely use boosting, but she has no inherent economy or card draw, so you would have to build heavily for it.
Daisy Walker -- She's definitely interested in boosting her , and Old Book of Lore (plus her free tome action) gives her easy card draw, but she'll need to work on getting resources. Daisy finds this more attractive than most since many of the static boosts are Hand items, and Daisy wants tomes.
Harvey Walters -- This card was literally made for him, and he has no problem whatsoever with keeping 5 cards in hand, although he needs the boost less than most and still needs to watch his economy.
Joe Diamond -- He can definitely use the boost, and Preposterous Sketches in his Insight Deck is helpful at keeping hand size, but his decks tend to be pretty resource intense, so cashflow will be a problem, and he can get static boosts from Hawk-Eye Folding Camera, Magnifying Glass, Tooth of Eztli, all of which are probably better spends.
Mandy Thompson -- When her search engine (heh) is up and running, card draw is no problem and her resource economy is robust with the extra Astounding Revelation draws, but she can get static boosts much like Joe
Minh Thi Phan -- She could use it, but skill cards and Grisly Totem are more her speed.
Norman Withers -- Relatively high stats, plus pricey Spell Assets and Events make this unattractive for Norman. I suspect he would prefer the Crystalline Elder Sign and Arcane Studies (4).
Rex Murphy -- Rex could use boosting, but he needs to keep an eye on card draw and resources, now that Taboo has kneecapped his beloved pal Milan. Maybe?
Ursula Downs -- In my experience, Ursula struggles a bit with resources at the begining, then has an excess at the end. With a little card draw tech, this might work with her.

Do any non-Seekers want this? Most of them have better options in their home class. Carolyn Fern of Roland Banks, maybe, if they can keep the cards and cash coming? I don't see Finn Edwards, Marie Lambeau, or any of the Dunwich crew using up their precious 5 of slots on this.

So, an OK card, but definitely more suited to some decks than others.