Revelation - For every 3 cards in your hand: Take 1 damage.

"... I can only hope that my account will not arouse a curiosity greater than sane caution on the part of those who believe me at all."
- H. P. Lovecraft, "At the Mountains of Madness"
Paolo Puggioni
Harvey Walters #3. 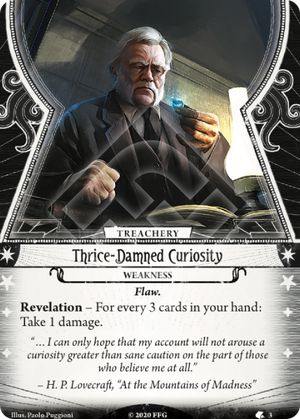 Taking 1 damage is pretty harsh, but honestly I've seen other weaknesses that don't even have the upside of dealing 0 damage under certain conditions.

Seriously there are two approaches to this card A: play a big hand deck, well just throw in a body Armour, if you don't have enough cards in hand to have drawn body armor you have less need for it.

OR my personal choice

B: play Harvey as a hyper committing engine, you draw fast, play and commit fast and end up treating this card as occasionally blank which is hilarious, even if you float at five cards for higher education you only take 1 damage from this "instant death" card. I've played Harvey this way and only had a single magnifying glass in play and just picked up every clue in play without ever stopping to to refresh, not having to ever take a draw or resource action and only having about 3 play actions in your whole deck leads to some crazy speed. (once you lose the move actions you begin to laugh like a bond villain)

Zerogrim · 187
Or Forbidden Tome to toss your damage onto foes. — MrGoldbee · 1059 3/14/21
Once, I play Harvey in a big campaign, I want to try him big-hand, versatile with "Deny Existence". Though there are currently several other investigators, I want more urgently to play — Susumu · 130 3/16/21
For your "plan B", I think Minh Thi Phan is better as she can get and give additionnal icons, commit from an other location and have access to a larger cards pool. — AlexP · 158 3/16/21
The committing from another location isn’t that important for a greedier hypercommit for clues rather than support, and otherwise both of their signatures give another card per round pretty reliably. So Harvey trades 1 pip/player for an entire card each round and trades survivor 0-2 for +1 Intellect. I don’t think those are bad trades and, if you have the card pool at this point, there are more than enough options in just yellow. Actually scratch that, there have always been more than enough options in yellow. I think my original blind run TDL Daisy had two Ward of Protections and that’s it outside of yellow/neutral. — Death by Chocolate · 789 3/16/21
Plus, as Brr decks go, Minh’s Signature Weakness is a much more annoying bump each rotation. — Death by Chocolate · 789 3/16/21
Minh's weakness can be pretty much cleared on the turn you draw it unless you autofail. Now with Third Time's a Charm, clearing the KIY has never been easier. Plus the true loss for not having Survivor 2 is always Scavenging (2). — suika · 7638 3/16/21
I think curbing Harvey's weakness is easier as long as you're playing your Bulletproof Vests. Minh's weakness more or less just has to be dealt with every cycle, and I remember distinctly having to clear it 5 times in one scenario from all my deck cycling. That said, I don't think either weakness is too scary. Harvey's is scarier early in the campaign. — StyxTBeuford · 12461 3/16/21
I think Minh and Harvey both are nice options, the fact you don't need your signature as much in harvey is a big reason of why I play him at least 51% compared to minhs 49%. — Zerogrim · 187 3/16/21
2

The good news is that this won't kill Harvey outright from full Health unless you are doing some Dream-Enhancing jankery before you find this. The bad news is that you will want to keep your hand size low until you draw this, and that is not Harvey's jam. Much like The Home Front, timing is going to be everything with this card, and seeker is not exactly great with soaking Damage. You could work with Charisma and Miskatonic Archaeology Funding to build a meat shield, but that's a lot of XP, Resources, and actions. You could add Mr. "Rook" and dig like crazy for it, but Harvey doesn't really need Rook otherwise, since he will have his whole deck in is hand sooner or later. On the other hand, nothing says "gambling with your life" like being a faculty member with a grant opportunity on the line.

In short, a very flavorful weakness.

LivefromBenefitSt · 675
Addendum: I realied that the MAF meat shield won't work because it's "No more than 1 of that damage/horror can be assigned to a Miskatonic asset." not "no more than 1 to each." C'est la vie, Harvey. — LivefromBenefitSt · 675 9/5/20
My first go-to upgrade for Harvey was to get Versatile and Deny Existence in order to ignore all the damage on this card. — toastsushi · 62 9/6/20
Getting deny existence with Versatile could work. I think Versatile is better with seeker cause they have so much draw and tutor abilities. A bigger deck also reduces the chance of drawing curiosity again. — Django · 3556 9/6/20
A few options I'm looking at — Calprinicus · 2790 10/3/20
Versatile + scavenging + bullet proof vest — Calprinicus · 2790 10/3/20
Backpack + painkillers + eldersign amulet (or sanity allies) — Calprinicus · 2790 10/3/20
The 4xp strange solution. 4 suuplies. Each supply heals 2 damage. — Calprinicus · 2790 10/3/20
Correct me if I'm wrong, but doesn't deny existence only work with encounter cards? — dr31ns5mf · 1 11/15/20
Yes Deny Existence says "Play when an encounter card or an enemy attack would cause..." so I think @dr31ns5mf is correct that this combo won't work. — coldtoes · 7 11/21/20
"Weaknesses with an encounter cardtype (such as enemies or treacheries) are considered to be player cards while they are in their bearer’s deck, and are considered to be encounter cards while they are being resolved, and once they have entered play." - from the Game Play FAQ. You can cancel the damage from Thrice-Damned Curiosity with Deny Existence because Thrice-Damned Curiosity is a treachery, and therefore counts as an encounter card - just like any other treachery - when being resolved. — Trinity_ · 172 11/23/20
No, you can't cancel it with "Deny Existence", you can just ignore it. :) Not so much a relevant info for Harvey, as for Diana. @ dr31ns5mf/ coldtoes: also notice the distinction on "Ward of Protection" (5), which adresses "non-weakness encounter cards". — Susumu · 130 2/1/21
Does this card count itself when calculating damage? — retromancer · 1 2/17/21