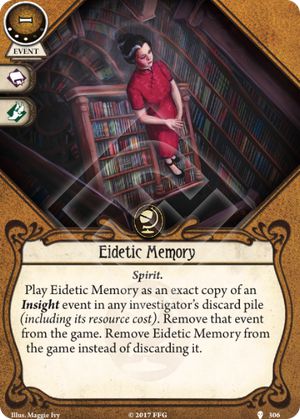 If you are seeker, you have a lot of great targets for this card.

Really, this card is probably worth a look if you are anyone who isn't splashing heavy on survivor. It is so freaking good.

Myriad · 732
Some highlight Insight cards: Cryptic Research, Deciphered Reality, Mysteries Remain, No Stone Unturned, Shortcut, to name a few. Might be best as a, "I need a second copy of this card right now" card. — SGPrometheus · 265 3/27/18
Wouldn't copying Cryptic Research, cost you ALOT of XP, since both Eidetic Memory and the card you are copying are removed from the game. Copying a Cryptic Research would end up costing you 7XP (3 for Eidetic Memory and 4 for Cryptic Research) — Daerthalus · 8 3/28/18
"removed from the game" is not "exiled." Both Eidetic memory and the card you copy remain in your deck, you just can't use them for the rest of the scenario. — SGPrometheus · 265 3/29/18
2

Because she has 2 instances of her signature card you can use 2 Eidetic memories despite removing them from the game.

vidinufi · 35
Hey that's an idea! And looking through the list of investigator specific insight cards and ignoring ones that likely won't end up in the discard pile (i.e. Dark Insight, Mysteries Remain, Occult Evidence, and Unsolved Case), you're left with Lola's Improvisation, but also Rex's Search for the Truth, another strong contender for Eidetic Memory. — Lucaxiom · 2028 1/9/20
2

If you use Eidetic Memory to copy Obscure Studies, does that mean that Eidetic Memory will then be placed beneath Amanda Sharpe, replacing the card that was there? Susequently, next turn, I would discard it as normal, as the remove from game window would have passed already? If I am correct, obviously Obscure Studies will be removed from the game and I am sure I would only be using the icons for Eidetic Memory (not the 3 ?s from the exact copy of Obscure Studies). Rules gurus, assist please!

Metius · 4
This creates a lasting effect on itself which copies an event, and it creates a delayed effect on itself which replaces discarding itself with removing itself from the game. It can't miss the window because the window will remain open for as long as it needs. As to the length of the copying, I think that would last until the card leaves the area it places itself in, much like an attachment. See the ruling on De Vermis Mysteriis. It's certainly unclear. — Yenreb · 9 10/19/20
I guess Eidetic Memory will be removed before you can commit it to a skill test. Get the card beneath amanda back, put EM there, and that's end of OS's effect. Then the "removd from game" effect of EM kicks in. — Secutor145 · 3 10/19/20
There is a significant difference between Eidetiic Memory and DVM - EM replaces discarding, while DVM doesn't bother with that and just straight up removes the card. If it's an event that doesn't get discarded, there is nothing to replace so I don't think EM would be removed. OS definitely would be though. — TheNameWasTaken · 3 10/19/20
Oh you are right! Didn't notice the replace discarding part. Thanks for point that out — Secutor145 · 3 10/19/20
In my opinion, you are correct that once Eidetic Memory moves under Amanda it'll revert back to having its own icons -- cards seem to stop being copies of other cards once they enter an out of play location (and cards under Amanda are out of play), as per the Painted World vs Delve too Deep ruling (https://arkhamdb.com/card/03012). — iceysnowman · 144 10/20/20