Mity
Tajemnica. Stage 2
Doom: 6. Clues: –
Once in a while a wind, sweeping up out of Cold Spring Glen, would bring a touch of ineffable foetor to the heavy night air... But the looked-for terror did not appear. Whatever was down there in the glen was biding its time, and Armitage told his colleagues it would be suicidal to try to attack it in the dark.
—H.P. Lovecraft, "The Dunwich Horror"

Forced - At the end of the enemy phase: Move each Brood of Yog-Sothoth enemy once toward a random location. 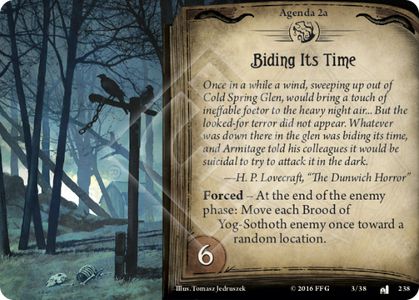 No Place to Hide - Back

Shuffle the encounter discard pile into the encounter deck. If there is a set-aside Brood of Yog-Sothoth, the lead investigator reads the following (out loud):

Bleak storm clouds churn overhead and a blanket of rain pelts the countryside. As the downpour grows in intensity, you take refuge in a half-ruined shack nearby. There is a flash of lightning, and in the brief illumination, you spot the outline of something large in the rain. Without warning, the distant trees bend, though nothing seems to be bending them. Moments later, a force with the strength of a truck crashes into your refuge. 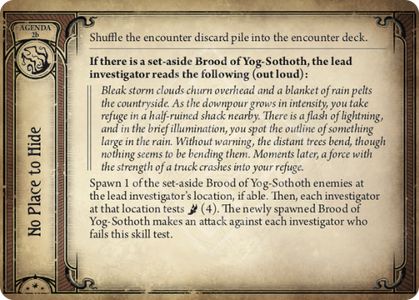