Lokalizacja
It is not reassuring to see, on a closer glance, that most of the houses are deserted and falling to ruin...
–H. P. Lovecraft, "The Dunwich Horror" 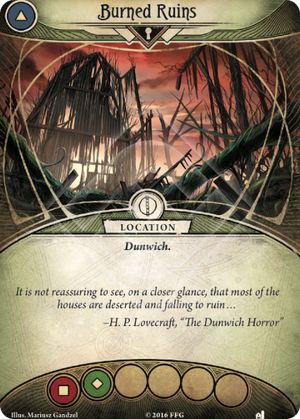 If there are no clues here: Draw the encounter card underneath Burned Ruins. (Group limit once per game). 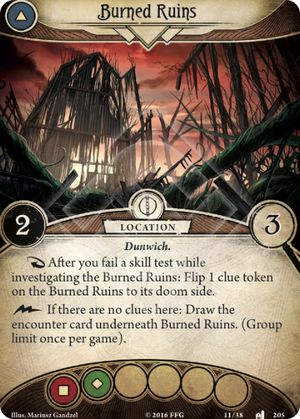 It's worth noting that although the additional doom isn't great, it does result in clues being permanently 'destroyed', and so Act 1b will result in fewer clues being put on The Hidden Chamber than normal. If health/sanity pressure are more threatening than doom pressure (or you can stack up a bunch of doom during the 'witching hour' before an agenda advances), this can be quite a boon in saving actions for R2/R3. (The fact that you 'fail' the investigation doesn't matter, since the goal is simply to remove clues, not collect them.)

In fact, there's even some benefit in Blood on the Altar to faster agenda advancement -- firstly, more sacrifices means an easier time with Undimensioned and Unseen (and thus Where Doom Awaits), which may be worth more than a story asset; secondly, if none of your unique allies have been Kidnapped! yet, then prematurely advancing the agenda can ensure that you have enough turns to beat the scenario in between one getting Kidnapped and them being sacrificed.