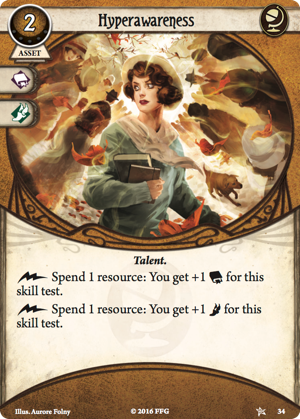 Physical Training, Hyperawareness, Hard Knocks, Arcane Studies, Dig Deep - they all have something in common: all these cards give you temporary boosts to individual skill tests at the cost of resources.

The inclusion of these cards is closely related to your investigator's economy. In conjunction with Dark Horse, you may plan to stay poor as a church mouse and cards like this can help you with that. Or, on the contrary, if you are living the dream, and some investigators proverbial float in resources, you can afford to bundle Hard Knocks+Arcane Studies or Physical Training+Hyperawareness to boost all your skills! In short, keep your hands off if you don't have action-free income!

If you are interested in the discussion, i would recommend this thread to you. Hyperawareness especially fuels Rex Murphy's ability, while Daisy Walker already has so many other tools to pump her intellect.

Physical Training, Hyperawareness, Hard Knocks, Arcane Studies, Dig Deep are part of a cycle, and partly share a common review. These cards are really, really inefficient, yet they have unique capabilities and I at least consider whether to take them every time I make a character. They have two main purposes:

If you do play one of these cards, when it is worth using? A really good situation is when +1 skill would turn 3 tokens (about 1/5 of the bag) from failure to success. So if turning a failure into a success isn’t worth 5 resources, you shouldn’t be using this.

I find Hyperawareness to be one of the more tempting cards in this cycle because it has an interesting ability to give evasion ability to a class without a lot of evasion options. It isn't usually practical for a seeker to play permanent evasion bonuses that will almost never be used, and putting a couple one shots kill bonuses into the deck may not be enough to get the job done. But with this card you are only committing half a card in your deck to agility (since the other half of the card is boosting intellect), but if you get into a desperate situation you can spend a whole bunch of money and suddenly become an expert evader. Or at the end of the game, if your seeker abilities have become useless because the goal is now to kill a boss monster, you can use all that money you've been building up from Dr. Milan Christopher to become the party evasion master and keep the boss occupied while your friends kill it. The intellect boosting side of the card is less exciting because it is usually more efficient to just retry a failed investigation attempt, but the scenario designers like to put situations in the game where that is not true and you really want to complete an investigation in a timely fashion, so boosting your intellect can still be pretty useful. Of course, this card is still far from an auto include, it is an expensive card and you still need to believe that your character’s deck design is such that you will end up with a bunch of money saved up by the end of the game (Dr. Milan Christopher helps with this).

ChristopherA · 97
I think this is a fairly in-depth look and I agree with the "not the most efficient" stance but: 0xp, No Slot, decent icons, means you can just run a 1 of in a base deck and always have a resource sink, which I think is important in any character. If my deck doesn't have any other on demand way to spend resources I always include one of these, because a pile of unspendable is even more inefficient. — Zerogrim · 262 5/22/21
Counterpoint: Seekers have a lot of easy-to-include resource sinks such as Working a Hunch, and better ways to deal with enemies (e.g. Occult Invocation, I've got a plan, Occult Lexicon, Mind over Matter). Seekers among all classes have the easiest ways to translate resources into game advancement that Hyperawarness should almost never make the cut. — suika · 8826 5/22/21
Counter Counter point there is limited deck space for enemy problem solving and resource sinks, running hyper awareness allows you to solve issues more than once without having to include lots of cards that might be better spent on other things. (it is also core set, so it being the floor of options and not being really that bad is pretty neat) — Zerogrim · 262 5/23/21
It's a bit of a stretch to call Hyperawareness an enemy management solution when you need to spend 4 resources and an action to play it beforehand before it becomes better than a manual dexterity. — suika · 8826 5/24/21