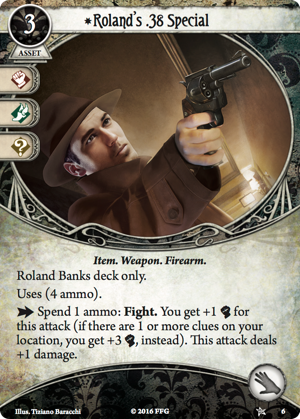 Guardians with unique weapons have to build around them. Especially since those weapons, (Becky and Roland’s special) are guns. But Becky reloads itself as Tommy sends allies into his deck. The special requires effort. With a few copies of reliable, the special will take you through almost any bag standard can throw at you. On hard and expert, you’ll probably need methods to deliver clues to your location, but Agent Banks’s access to seeker cards can take care of that.

Unfortunately, contraband is innately not available to the Fed. And the maximum of two damage per shot will require other methods, like vicious blows, marksmanship, and custom ammunition, which are all within faction. Stick to the plan, grenades, and agency backup work around the fact that this is a one-handed weapon.

Edit: The advanced version is +4 sometimes. Worth building around! And it works with the Quickdraw Holster!

MrGoldbee · 1233
My problem with both this and Becky is that about mid-late campaign, 2 damage isn't enough to carry you, and i don't want to find both this card and custom ammunition. I'd rather spend 8-10xp putting two big guns in the deck for consistency. (Also, Tommy doesn't technically send his allies to the discard pile ;p) — SGPrometheus · 636 12/3/20
Well, he CAN (reaction triggers are optional), but if he does, then Becky doesn’t get any ammo. — Death by Chocolate · 1131 12/3/20
1

I find it hard to believe that no one has written a review of this, but here we are. It's probably best compared to the .45 Automatic, since that's where the game design was when they came out. Same ammo, bonus, and damage, but the .38 is 1 resource cheaper and has a chance at +2. If I am reading the FAQ right, the critical language is "on your location," so clues on enemies, cards attached to the location, the investigator, etc do not count for the boost. Anyway, it's a nice gun, especially in resource-starved Roland. However, nice guns are pretty common, and this one pairs with one of the nastier signature weaknesses, so is it worth it?

The "book" signatures are less good and less bad , so they are probably the choice for the risk averse. People who are willing to gamble with Roland's shaky Sanity might be satisfied with the "box" signatures or go for both sets.

LivefromBenefitSt · 887
The .38 special combos with clue-dropping cards like Quick Study and Maleson — Zinjanthropus · 205 10/9/20
Sure, but it's probably better to not drop a clue than to drop one specifically for a combat bonus; it's kind of action-intensive. When it happens naturally (Maleson deals with a ad treachery, and Roland needs to shoot something anyway), though, definitely. — LivefromBenefitSt · 887 10/9/20
I think the idea would be that you'd drop the clue to boost your gun and then get it back from killing the enemy with Roland's ability. Roland actually has a lot of synergy with the drop clue for X cards for this reason. — Time4Tiddy · 194 12/5/20